Angelica McKenney said she remembers seeing the greenhouse at Ward Beecher as a child, marveling at the big, beautiful plants inside. When she started attending YSU, the greenhouse was filled with clutter instead of plants.

As president of the Youngstown Environmental Sustainability Society, she has been working with the organization to make the greenhouse functional and thriving again. 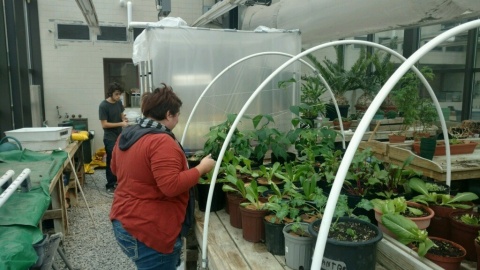 YESS aims to raise awareness about environmental sustainability and teaching students how to grow their own vegetables. McKenney got permission from Ian Renne, assistant professor of Ecology, to use the greenhouse if they cleared it out, since they weren’t allowed to create gardens on campus.

“So that’s what we did. We cleaned it up, found some seeds and dirt, and we started planting things,” she said.

Tyler Miller-Gordon, president of the Student Government Association, said the goals of YESS align with SGA’s initiative to promote environmental sustainability on campus and in the city of Youngstown.

“This [group] provides opportunities for education, to diversify interest, to have access to healthier foods and take pride in your institution,” Miller-Gordon said.

SGA is playing a supportive role in the efforts of YESS, Miller-Gordon said. Gabriella Gessler, executive vice president of SGA, said it’s important to support the greenhouse because Youngstown doesn’t have many other greenspaces to grow good quality, fresh food.

“We are in a food desert; we aren’t exploding with agriculture,” she said.

Last semester, YESS started a program called Adopt-A-Plant, where students from Cafaro House were encouraged to plant a seed at the greenhouse and then take the potted plant back to their dorms when it started producing vegetables.

“Helping to provide food for people is the main purpose of our Adopt-A-Plant program,” she said. “While promoting the greenhouse is a secondary objective, we are growing plants for a reason.”

Previously, plants couldn’t survive in the greenhouse because it wasn’t built with the right kind of glass, and it wasn’t retaining heat and sunlight in the room. To combat this, a few members of YESS built hoop houses.

Ian Matey, a member of YESS, said the hoop houses are a preventative measure against the cold winter temperatures and lack of sunlight.

“It’s not greenhouse glass, so we try to capture as much sunlight and photons as we can,” Matey said. “We plant the seeds in there, and once [the plants] get big enough we move them out.”

Along with building the hoop houses, YESS also spent hours cleaning and recycling old things in the greenhouse, like extra pots. There are still small problems in the greenhouse that need addressed, like a hole in the floor where a pond used to be.

YESS is reaching out to Home Depot and Lowe’s and asking for donations of potting soil. Matey said he is going to ask businesses to keep a compost bucket and their stores.

“I would like to talk to Stone Fruit and Pressed and see if they can offer us old coffee grounds,” he said. “Anything organic like that make for good compost.”

Joining this organization is beneficial for students because they get to help people in need, it gets them involved on campus and it’s important to learn how to grow food, McKenney said.

“It’s a skill you will never regret having, it is something that is always useful and can be incredibly relaxing and stress relieving,” she said. “It’s a big bonus.”

About $2 million is being allocated to renovate Ward Beecher in the summers of 2017 and 2018, according to YSU Provost Martin Abraham. McKenney said she is concerned because if more students and organizations don’t use the greenhouse, then it could limit the amount of money that is used for the greenhouse.

“It’s kind of at the point where you need to accept it the way it is and make some small changes like improving the lighting, or tear the whole thing down and rebuild it,” she said. “A lot of things can’t be retrofitted, and that’s a problem.”

“Now more than ever it is significant to be conscious of our environment, how we use it and treat it and what it needs from us,” she said.