Students and faculty at Youngstown State University made a joint effort to raise awareness for mental illness and combat the stigma surrounding it on March 23 in Kilcawley Center. 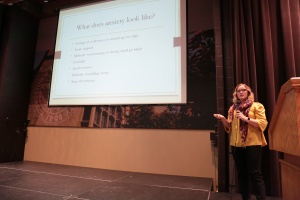 This is the second year the Student Government Association hosted the Mental Health Advocacy Training. SGA president Gabriella Gessler said the potential risk of suicide is heightened during college years, so it is important to raise mental health awareness and equip the campus with suicide prevention information.

“This event is to help students realize that we are all in this together and that help is available to those who need it,” Gessler said.

Jerrilynn Guy, member of Chi Sigma Iota, said mental illnesses such as depression and anxiety are more prominent on college campuses throughout the country. She said the event focused on issues with these two conditions, but other mental illnesses were also covered.

“College brings on a variety of different occurrences that can spike mental illnesses,” Guy said. “Mood disorders, trauma, adjustment, social anxiety and general anxiety [were] addressed at the event.”

She said the best way to bring feelings of anxiety and depression down is to do something that the individual enjoys, whether it be meditating, working out, hanging out with friends or any relaxing activities.

Handouts were given at the event containing a variety of small items, which Gessler said were designed to help remind students to stay grounded and reach for help when they need it.

“On-campus counseling is available to students, along with a variety of other resources that were listed on the pamphlet,” Gessler said.

If students believe counseling would benefit their situation, Guy said they should speak to Anne Lally and Ann Jaronski from Counseling Services.

“It is important to fight the stigma that surrounds mental illness because of how many students and adults are affected by it,” Guy said.

Help is also available through a counseling clinic housed on the third floor of Beeghly Center, she said.

Andrew Kirkbride, a business student, said involvement in events like the training is important to educate and raise awareness for mental illness.

“People are afraid of what they do not know,” Kirkbride said. “It is important to equip individuals with the means of coping with whatever mental illness may be impacting them.”