Additional reporting by Billy Ludt and Will Keffler

Youngstown Flea, a flea market that features local handmade art, also had a part in the Frenzy. It was set up next to the Covelli Centre with a performance by Roger Juntunen.

The West Federal Street was filled with Youngstown citizens, alcohol, food trucks, hula hoopers and music from 2 to 11 p.m. The event attempts to unite the city with different visual and musical arts. Twenty-five different bands and artists performed at the event.

The Jambar interviewed a multitude of the bands featured at Federal Frenzy to learn more about their music, their performances and their experience in Youngstown, among other things.

Lili K is a jazz/funk/r&b artist that hails from Wisconsin. She has performed at festivals like South By Southwest and Lollapalooza and has worked with artists such as Chance the Rapper, Vic Mensa and Sulaiman.

Lili and the Lili K band performed songs from her older EP’s and her new album, “RUBY,” at Circle Hookah & Bar as one of the first acts of Federal Frenzy.

“RUBY” is Lili K’s first full-length solo album. She said she feels like making music by yourself is a lot different than collaborating with other artists, but both are enlightening in their own way.

“It’s a totally different thing when it’s your baby,” she said. “When you’re working with other artists, everyone’s feelings and influences melt together, but when it’s yours, it’s just a different beast.”

Lili said she enjoys being able to use her talents to lift other people’s moods and looks forward to performing because she knows that music can heal.

“There will be times when I’m opening for an act, and I’ll see people grooving to my music even though they didn’t come for me,” she said. “I just want to make people feel good with my music, ‘cause music can do that.”

Brittany Benton (DJ Red-I) and Samantha Flowers (Playne Jayne) are two individuals that are passionate about music, creativity and individuality.

The two form hip-hop duo FreshProduce., a hip-hop group from Cleveland. The duo records, mixes and produces all of their music themselves with the help from a small group. They also make all of their own T-shirts, and run businesses on the side to keep FreshProduce. a completely self-sufficient music group.

For Federal Frenzy, FreshProduce. performed with the help of an additional DJ, DJ Candi Fresca.

The group said that they are drawn to making hip-hop music because it allows them to express themselves through a different medium.

“The appeal for us is just being ourselves and making sure people can feel what we’re putting out using our music … You know, there are certain tracks being laid out for rappers, but we lay our own tracks. We don’t ask what’s expected of us; we ask what we have to express,” the duo said.

As far as style, FreshProduce. said they prefer to stick with whatever they feel satisfies who they are at the moment when they create the song.

“You can save a million kids from a burning building and someone will say you didn’t do it fast enough,” they said. “You can never please everyone, so we’re doing our stuff to satisfy our musical needs.”

JD Eicher and his band have been in the Youngstown area music scene for multiple years, and with the upcoming release of their fourth album, the group plans to return to the roots that made them a household name in the area.

“We’re more moody and vibe-y, singer songwrite-y. We started to head off into the rock and pop side, but we’re going back to where it started,” Eicher said. “We’re also dropping ‘& the Goodnights.’ We’ll still have the full band; the name was just too long. We’re simplifying [everything].”

Eicher said that he and his band think that Youngstown is making a name for itself in the arts again, especially by incorporating music-based events such as Federal Frenzy into it’s agenda of events.

“We’ve seen some ebb and flow in Youngstown’s music scene [since we’ve been a band],” Eicher said. “It’s definitely on the rise, and [events] like this are getting people downtown and putting the emphasis on local music again.”

This Cleveland-based rock group made their first appearance in Youngstown when they played at Suzie’s Dogs and Drafts as an act in Federal Frenzy.

The band has two albums out currently, “Don’t Look” and “Directory of Thieves.” Their third album, “Bleed” is anticipated to come out in either summer or fall of this year.

“We have high aspirations for releasing this shit for free. You notice how rappers get these huge fan bases because their music is free and their fans go ham at shows,” TJ Maclin, the band’s lead vocalist and guitarist, said. “We want that. If we release this for free and it’s more than beats and words, we’re thinking it’ll be something good.”

Maclin spends his spare time watching Netflix and putting his hands in various music projects in the Cleveland area. Foti is an award-winning barista and according to the group, he can make a stellar latte.

Thaddeus Anna Greene said they enjoyed playing in Youngstown and are looking to return to the area for more shows soon.

Sam Goodwill is a Youngstown group that has influences of rock and the singer/songwriter genre. After the Federal Frenzy show, Sam Buonavolonta (the lead vocals) and Bob Young (percussion) are heading to open for Viking Moses in Europe. 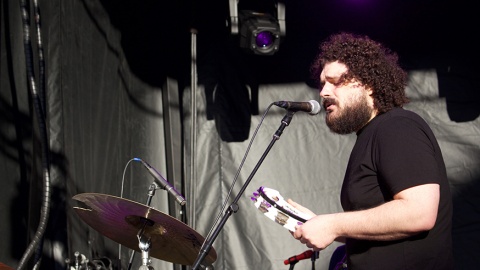 “[I met] Viking Moses through a friend of a friend. It was awhile ago, around 2009,” Buonavolonta said. “I’m leaving Wednesday morning. We’re driving to New York — JFK — all that day, and then we’re flying out at 6:30.”

The band played on West Federal Street and opened up for Vinyl Theatre and Reel Big Fish.

The band recently finished up their 25th anniversary tour and made a stop in Youngstown before flying back to their homes.

Even though the band has been playing music for 25 years, the group said that they don’t ever get tired of performing.

“Everyone in the band likes to make other people dance and have a good time. How can you get so sick of playing songs that people love?” Aaron Barrett, the lead singer, said. “You can’t look at people going nuts and not love it.”

Matt Appleton, saxophonist of the group, said that in his years of performing in the band, he and the group have seen fans do some really crazy things during concerts.

“Someone jumped from a balcony [when we played a show] in London. It was a really nice theater with a third row balcony. The first dude did it successfully — they were actively communicating so it worked,” Appleton said. “The second person went immediately after and just — plop. It stopped the show for a long time.”

Reel Big Fish played at 9:30 p.m. in the middle of West Federal Street on the main stage. People crowded next to each other, danced and drank until the act ended at 11 p.m.

Appleton said he thought the variety of acts brought in was diverse and the groups were interesting.

Penguin Productions is planning on hosting the third Federal Frenzy event in 2017.