The Rescue Mission of Mahoning Valley has occupied the same building on Martin Luther King Boulevard since the early 1970s as a homeless shelter for those in need.

John Muckridge, president of The Rescue Mission, said they want to construct a new building for the rescue mission.

“This building was built in 1930; it’s literally falling apart. We have bricks falling off the building and we have drains, showers and our sinks in our bathrooms that are busted inside the walls,” Muckridge said.

Muckridge said they cannot break into the walls due to asbestos.

“We have these pipes wrapped with asbestos, so once you break into the wall to begin all this construction asbestos starts floating through the air,” Muckridge said.

The Rescue Mission is working toward a $4.25 million project for their new building. 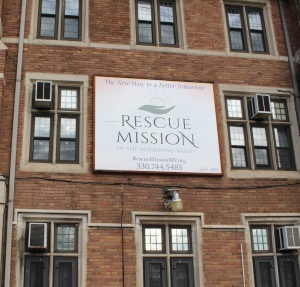 “That will give us a 30,000-square foot facility which is about 3,000 square foot more than what this building is,” Muckridge said.

Muckridge said they will increase the number of beds in their new facility.

“It will give us a chance to have more beds for women and children who are often on a waiting list,” he said. “Plus, we would increase the storage component too, so we could store clothing for those who are staying with us.”

He said they have $1.5 million  in pledges towards their new building.

He said he is confident they’ll raise the remaining million dollars to go toward the new building.

The new building is set to be built on the Southside of Youngstown near the old Southside High School and will be sitting on the parking lot behind the school and field. The location is on the corner of Erie and East Delason Avenue.

Muckridge said they’re planning to break ground and start construction in spring or summer of 2018.

“This used to be the African-American Young Men’s Christian Association. There was a swimming pool here and a gymnasium we use now as the men’s dorms,” Muckridge said. “Just the flow of our operations will be more efficient with the building that was designed specifically for what we do, so that will increase.”

He said the new building will also contain more rooms.

“We would have a chapel hall, some space for resources like Bibles,” Muckridge said.

Lynn Wyant, director of Development at the Rescue Mission, said they provide a lot for the homeless.

“We provide food, overnight shelter, safety and resources to anyone in need in the community,” Wyant said.

Lisa Armeni, a volunteer, said she has gained a lot from working with them.

“I have learned a lot from working with the homeless. Most people misunderstand them and have stereotypes to them living on the streets, but for some this was not by choice, but by circumstances that led them to being homeless,” Armeni said.