David Brown and his girlfriend attended an anti-Vietnam War rally at Youngstown State University, and a photograph of the pair appeared on the front page of the Jambar on Oct. 27, 1970.

Brown said he was listening to the speakers and was interested in what was occurring at the rally.

“We were kind of engaged with everything going on and lo and behold, one day I picked up the Jambar and there we were on the front cover,” Brown said.

Brown said he was “flabbergasted” when he discovered his picture on the front page.

Brown said he cannot remember much about that rally, but it was peaceful.

“If you were at one [anti-war rally], you were at all of them because fundamentally nobody in our age group wanted that war to be going on,” Brown said.

Prior to the YSU protest, students gathered at Kent State University on May 4, 1970. 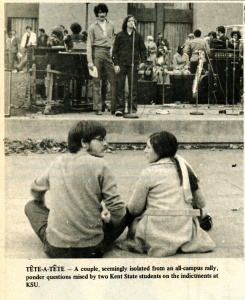 Members of the Ohio National Guard fired at unarmed student protesters at KSU during the protest, killing four and injuring nine others.

Brown said he learned about the KSU protests by reading the Jambar. He said he was taken aback by the KSU shootings and told himself this violence should not occur on a school campus.

Keith Robert’s late wife, Denise Roberts, was on the campus of KSU when the shootings occurred.

“May 4, another demonstration began with speakers at the Victory Bell located in The Commons, which is in the rear of Taylor Hall,” Roberts said.

Roberts said the National Guard dispersed the crowd with tear gas and protestors were provoking members of the Guard.

Roberts said the Guard started shooting and his wife, Denise, and hid behind a Volkswagen.

“When the shooting stopped she came out of hiding, and there was screaming from her friends and classmates, blood everywhere, students bleeding and dying in front of her,” Roberts said.

Brown said he never enlisted into the service and was never drafted. He said he was petrified of the thought of going to fight in the Vietnam War.

“I’m a lover not a fighter. If I’m backed into a corner, I’ll do what I need to do and I was that way back then and that part of me has not changed,” Brown said. “I’ve become more confident in who I am and I still wouldn’t want to go to war.”

Brown said he feels honored to be a part of history.

“Not that I played any significant role in anything going on but if a picture means anything then yes, I did play a role and I feel privileged to be a part of anything that might leave a mark on the world in some way,” Brown said.