Nathan Myers, the associate provost of the IPO, said he created the concept of the group two months ago.

He said there were a couple problems that the IPO was trying to solve and there have been challenges associated with being an international student in the United States.

“It was valuable for [international students] to be able to secure work experience and some small salary for students from an on-campus job,” he said. “By actually paying people to help make the community better and paying people basically to solve the problems that are actively faced by students every day, that might solve bigger problems not only providing people a job but also giving them experience in helping students in elevating their life while they are here.” 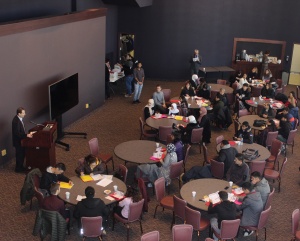 He said they face difficulty meeting people, finding a place to eat and having transportation around the area.

Myers said he lived on campus when he came to YSU for the first six months. He said it allowed him to live like a student and become aware of difficulties in living without any transportation.

Myers said he saw a large group of new international students that were trying to walk to Walmart from 5th Avenue last semester.

“No one should feel that there is a problem that cannot be solved, whether it’s a social problem or transportation problem,” Myers said.

According to Myers, there were more than 90 applications for 15 open positions in United Penguins. United Penguins is divided into four teams: an activity team, a transportation team, a marketing team and a university life team.

Fourteen United Penguins students leaders were selected by considering their grade, life experiences and other criteria.

He said most of the positions are filled by students from different countries to help represent the perspective of their nationality.

Ahmed Awad, a senior electrical engineering major, is the leader of the transportation team of United Penguins. He said he has been working for IPO since last summer.

“I enjoy being a driver for IPO. It’s a good experience because I get to be with a group of people during all the activities,” he said. “It made me feel more connected to the new students around YSU.”

He said he was not very active prior to being involved in the IPO even though he joined some social events. Meeting more people made him enjoy living in the United States more.

“People want to go where they feel like they belong. We hope international students will join us and we hope we can gather as much as we can so that we can all have a fun experience and time,” he said.

Jiwon Mun, a sophomore biology major, is a member of the housing life team. She said she was looking for a job on campus for a long time. She applied for all of the positions that she was qualified for when a job opened at IPO last semester.

“I wanted to get a closer relationship with IPO officers,” she said. “It was also for money, but I wanted to know about what is going on [among the international programs].”

Mun started at YSU in the English Language Institute (ELI) in 2016.

“I wanted to get to know new people at YSU not just my classmates,” Mun said.

She said those experiences from her first years at YSU would help new international students.

She said the United Penguins are friendly and open to everyone. There are team activities, which provides for collaboration within the international community at YSU.