The chilly August wind drew shivers up the attendees’ backs as they stood together in the shape of a heart. The luminaries flickered as the names of those who lost their battle with addiction were called out into the darkness.

OhioCAN Mahoning County held the third annual vigil on International Overdose Awareness Day on Aug. 31 at the Unitarian Universalist Church of Youngstown to help educate the public about addiction and remember those who lost their lives from the ongoing epidemic.

OhioCAN, otherwise known as Change Addiction Now, is an organization whose main purpose is to educate, empower and embrace anyone affected by substance use disorder. They advocate on both the state and federal level to end the stigma and shame associated with addiction.

Hopeanne Lovrinoff-Moran, coordinator of the OhioCAN Mahoning County event, emphasized that they work off of the science-based fact and definition that addiction is a chronic relapsing brain disease.

“People have a misconception of, ‘Who is the addict?’” Lovrinoff-Moran said. “It’s not somebody of a certain low socioeconomic level. It’s actually a lot of middle and upper-class folks. They are doctors, lawyers, nurses and judges.”

Knowledgeable people spoke out at the event, ranging from recovering addicts and social workers to dietitians who discussed various recovery techniques to help those suffering with addiction.

Salvatore Di Liello, a naturopathic doctor of Cortland, spoke to the audience on how a person’s diet can affect one’s mood and how it could lead to drug abuse or overdose.

He explained that studies prove that those who lead a healthy lifestyle are happier than those who consistently eat junk food and don’t take care of their bodies, which could eventually lead to depression.

Sarah Cercone, a licensed social worker who recently moved back to the Mahoning Valley, expressed the importance of community in a current or recovering addict’s life. 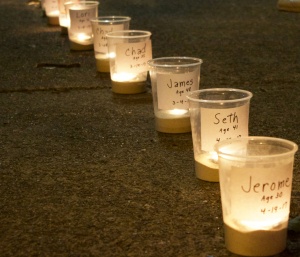 “By working together, substance abusers can work together to find the path to sobriety,” Cercone said.

Phillip Krauss, a recovering addict since November 2014, spoke of life after drug-use, his multiple stints in and out of rehab and how he used to be a part of the addict community.

“It was heroin that brought me to my knees and it was horrible, but being on the other side of that is really great. I’m honored to be a part of the recovering community,” Krauss said.

Aside from educating the public, the event was used to remember those who have lost their lives to drug abuse. The event concluded outside the church in front of a banner plastered with pictures of people who lost their lives to substance abuse in Ohio.

“If things keep progressing, we are going to have to make a second banner sooner or later,” Lovrinoff-Moran said.

Plastic cups filled with tealight candles, with the names of over 68 people who lost their lives to addiction, illuminated the walkway in front of the church. The night ended in whispered remarks as the wind blew the memorial candles out.

Cerone said it is time to fight this epidemic head on.

“This is not okay. This is not normal. This will not be the accepted treatment in our valley,” Cerone said. “We will not go down without a fight.”