Greek life at Youngstown State University has played an integral role in student experience throughout the university’s history. These student organizations have promoted philanthropy, sisterhood/brotherhood and the academic success of its members.

Recently, inactive and active members of National Pan-Hellenic Council (NPHC) chapters at YSU have expressed their dissatisfaction with the Office of Student Experience’s handling of the predominantly black Greek life chapters.

Members have described various incidents that called upon the request of physical or online documentation of NPHC-specific policies regarding their chapters’ functions on campus.

Khadijah Ndoye, a member of inactive sorority Zeta Phi Beta, said Student Experience has accused her sorority of recruiting while inactive through strolls (a form of dancing practiced by black Greek life), promoting unsanctioned parties for charity and wearing their letters without permission.

Upon request by the students to discover where it states strolling and other activities pose as violation of the policy, Ndoye said they have yet to see physical documentation of these rules.

A member of the inactive sorority Alpha Kappa Alpha, who asked The Jambar not to be named, said she has faced a similar situation.

“Say [NPHC members] asked for this policy, [administration] could go up and try to put something together. But if you look for the past policies, there’s nothing there. It’s just all what they’re saying,” she said.

A Look at the Differences

There are three distinct Greek life councils at YSU. Out of the three, the NPHC is made up of predominantly African-American sororities and fraternities known as the “Divine Nine.”

YSU has four of the NPHC chapters, which include Iota Phi Theta fraternity, Alpha Kappa Alpha sorority, Delta Sigma Theta sorority and Zeta Phi Beta sorority. Currently, the only active chapter of the Divine Nine on campus is Delta Sigma Theta. Student organizations must have a minimum of five members to be considered an active group on campus.

During the member intake process, any organization wishing to recruit new members has to establish a recruitment timeline with their Greek life advisor on campus. This timeline includes when they will hold an informational (a meeting with potential members that provides information about Greek life on campus) and take in members, which requires permission from their regional council.

Once that is ready, the organization is invited to Meet the Greeks where they can begin to recruit new members, but there is a major problem with this for NPHC chapters; the NPHC has a different method of recruiting.

Instead of holding an informational and extending a bid to potential members like National Panhellenic Conference chapters, potential members are the ultimate decision makers when it comes to picking what NPHC chapter they wish to join.

Current members have expressed difficulties recruiting in an environment that does not encourage or allow them to recruit their specific way.

Erin Driscoll, director of Student Activities, said NPHC chapters have faced issues with inactivity due to lack of members for the past few years.

“We’ve had a variety of different groups active at different times,” Driscoll said. “Often there were one or two active chapters, so they had five members or more … and then it would kind of shift.”

Eddie Howard, YSU executive director of Student Experience, said the five-member policy was not followed effectively in the past.

“We allowed black Greek organizations to exist with less than five [members]. So when I came here, I said, ‘I don’t know why we’ve allowed you to do that, but that is unfair to all the other student organizations on campus and you need to be in compliance,’” Howard said. 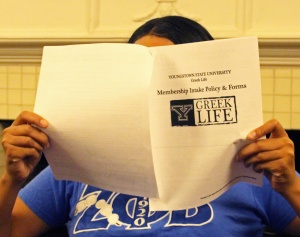 Ndoye said it is difficult to find enough members to become active when they are not invited to attend Greek functions.

Howard said being a part of an inactive organization means you are no longer a member on campus.

“There is no such thing as ‘inactive.’ When you’re inactive, that means that your organization doesn’t exist,” Howard said.

He went on to say, “For the purposes of the policy that we have in place … we keep their file, we keep their information but they’re not active, so there’s nothing for them really to be doing on campus because they’re not an active organization.”

Howard said that when organizations like the YSU NPHC chapters don’t meet membership requirements, members are still a part of the organization on a national level, but they are just not a member on campus.

In NPHC culture, members put on yard show competitions to showcase strolling and stepping (a form of dance) abilities from visiting and host sororities and fraternities. The last recorded yard show at YSU was in 2013.

According to Ndoye, while attending Ohio State University, the NPHC was allowed to bring other chapters to their campus to hold step shows for the students. At YSU they are prohibited.

“If there was a school-wide step show but didn’t have enough members, we could ask neighboring schools to fill in,” Ndoye said.

Howard said yard shows will not be held on campus as long as he is here because it may promote these chapters on YSU campus, which could lead to improper intake process or hazing.

In 2012, the now-suspended NPHC fraternity Kappa Alpha Psi was caught up in a controversial hazing incident that sent two pledges to the hospital and indicted nine members of the fraternity with 16 felony charges. This led to the university suspending the fraternity until 2027.

Kappa Alpha Psi is not the only NPHC fraternity in recent years to face extended suspension.

Chakiel Crumsey, a member of the suspended Iota Phi Theta fraternity, revealed that his chapter has been suspended due to illegal recruitment allegations and parties by former members who no longer attend YSU. The new members were suspended for five years.

“Everything we try to do is cancelled, is blocked [and] is basically trying to be shut down in many ways. We’re not held to the same standard that the Greeks are held to,” Crumsey said.

Driscoll said Greek life comes with more components than other organizations, such as recruitment processes, selection processes and the financial component. She said this may make it seem like the deck is stacked against them compared to other student organizations.

“The students who are in our NPHC chapters have invested a lot of time and energy in becoming part of those organizations,” Driscoll said. “I understand why it’s frustrating to not be able to get to that next step.”

Many NPHC members are left frustrated and questioning how they can obtain new members if they cannot wear their letters or stroll to let potential members know they are on campus.

When chapters are inactive, Howard said the Office of Student Experience discourages these groups from displaying their chapter’s letters or strolling.

“[NPHC chapters] do a lot of things that let people know they are a member of a particular organization … so in my mind when an organization is inactive, when you do the things they’re talking about, when you wear your letters, you are a billboard,” Howard said.

Howard said the chapters can confuse interested students by doing this, making it seem as if they are active on campus.

“It is a recruitment tool for them,” Howard said.

This opinion is not shared among all YSU Greek life administration. Driscoll said she would not consider activities such as strolling as formal recruitment.

“I think of strolling as a demonstration of pride in your organization, a demonstration of your brotherhood or sisterhood, but I don’t think of that as a recruitment activity per se,” Driscoll said. “It publicizes the fact that you’re around, so it could contribute to students knowing that there are students on campus that are part of an organization.”

William Blake, the director of Student Diversity at YSU, had worked with NPHC groups for more than 15 years, but has not been affiliated with adjustment of the groups for the past four to five years. Blake said he has noticed a shift in issues from students over this time.

“Some of the problems that I think the students are seeing now is they don’t feel that people working in that particular area have a familiarity with NPHC groups,” Blake said. “And so there probably needs to be some education that goes on between and amongst them both, on the student side as well as on the advisory side.”

“Editor’s note: The name of the anonymous NPHC sorority member was named in an earlier version of this story. It has since been redacted.”