Vans Warped Tour is a traveling rock festival that began in the summer of 1995. This past summer was the festival’s last run. A Youngstown rock band, Alteras, had the opportunity to play a few shows at Warped Tour. 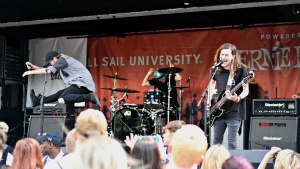 Zack Orr, bassist of Alteras, said playing at Warped Tour was an unbelievable experience. He said Warped Tour has always been influential in his career.

“[I’ve been] wanting to play ever since I started attending when I was young,” Orr said.

Warped Tour hosted popular musicians such as Bowling for Soup, 3OH!3 and Mayday Parade. The festival is known for having some of the biggest names in rock music headline the tour and has become famous among music enthusiasts.

“Seeing [our] name on that big, inflatable sign with so many other great artist was truly something I’ll never forget,” Orr said.

Much like Orr, many young adults grew up going to Warped Tour. Brianna Williams is a friend and fan of Alteras. Though she wasn’t able to make it to their show, she said she was excited to find they would be playing at Warped Tour.

“I’ve seen them a bunch of times, so I didn’t feel too bad about it,” Williams said. “I would have loved to share that moment watching my [friends] on stage.”

Williams said she loves Alteras and she believes they’re incredible musicians and an incredible group of guys. She said they just released their album “Myself on Fire” and she’s been jamming to it nonstop.

The last run of Warped Tour was bittersweet for many concert goers.

“My dream was to work on Warped’s social media team,” Williams said. “I was a bit crushed when I first got the news of it ending.”

She said her favorite Warped Tour memory was from this year when she was watching the band Ice Nine Kills perform. She said she looked in the crowd to see how much fun everyone was having.

“It got to my [feelings] a bit because this would be the last time this crazy, sweaty tour would be here,” Williams said. “Everyone there was having the time of their lives. It was beautiful, really.”

Warped Tour serves as a community for people from all walks of life to enjoy music. This year was Youngstown State University student, Ashley Cunningham’s second year attending Warped Tour and she described it as a place for people to listen to music unapologetically.

“It’s a place to fall in love with music you’ve never heard before,” Cunningham said. “You get to meet and see a bunch of bands you’ve loved or that you’ve just found. Nonetheless, it’s a place of community.”

Cunningham was able to see Alteras’ set at Blossom Music Center and she said they deserved their place at Warped Tour.

“It’s great that they have been able to get where they currently are,” she said. “They’re talented. It was exciting to see someone from Youngstown playing [alongside] my favorite bands.”