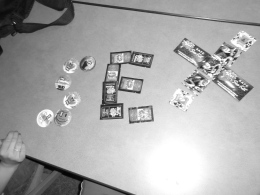 A passion party is a gathering that explores human sexuality in a judgment-free environment. On Tuesday, a passion party was held in Cafaro House for the YSU community. Photo by Kara Pappas/The Jambar.

“I expect it to be interesting,” said Gregory Satmare, a junior majoring in psychology.

Satmare said it was his first passion party, and that he was going into the party with an open mind.

Sexpert Vanessa Stamper led the event, using many different toys and demonstrations to promote the message of safe sex.

“Always use a condom,” she said. “If you don’t have one, search the dorms because somebody has one.”

Stamper presented different products with the hopes of showing participants that there are ways to spice up a relationship while still being smart.

“I would rather see every kid with a toy than have them go out to a party and have unprotected sex with a stranger. That’s dangerous,” she said.

Roughly 50 people attended the event in the multipurpose room of Cafaro House. Breanne Romeo, a residential education graduate assistant and one of the party’s planners, was surprised by the turnout for the passion party.

“I’m happy with the turnout because a lot of students are busy during this week with classes or exams,” Romeo said.

Jennifer Schuster, a junior majoring in forensics, was a little apprehensive about attending, saying she went only because her friends did.