Youngstown State University President Jim Tressel recognizes the need to dedicate more resources to students of color, but said we need to prioritize work that can be done without additional resources, citing budget constraints.

“The first thing we need to do is everything that only takes a little bit of elbow grease,” Tressel said. “Once we become better at attracting more students, retaining more students and — if we can get our enrollment going which drives your revenue — all of a sudden we can invest in things that we can’t afford.” 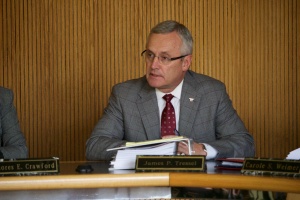 He said this not only applies to the administration, but also to students as well.

“That student who is coming in and struggling a little bit now,” Tressel said. “It doesn’t take any talent to ask questions, to be on time, to get involved in a free activity.”

“I think it is our responsibility as vice presidents and directors who are in charge of these programs to make sure that these initiatives are a priority,” Howard said. “There is no new money anywhere.”

Tressel said this is why he and Sylvia Imler, executive director of multicultural affairs, created the Culture of Community Collaborative.

The initiative seeks to create a vertically integrated group of students, faculty and staff across campus. The collaborative would report to the administration and a smaller culture of community committee.

They intend to encourage inclusion and diversity across campus. Tressel and Imler have spent the past few months discussing it with various organizations on campus. The group has grown to include around 70 representatives.

Tressel said that many of the strategies to improve black student experience coincide with the goals of the Culture of Community.

“[Culture of Community] is an intentional effort to get people to get involved, become aware and respect things that they haven’t had experience with before,” he said.

Julian Jones, president of the Student Diversity Council, said the collaborative can combat the issue of segregation if the right people are chosen.

“I think it will [help] if they are appointing the right people. Some people really don’t want change, and you need to be willing to change if this is something you want to do,” Jones said.

Imler addressed the ability of the Culture of Community to properly target black issues concerning students while still being broadly oriented toward diversity.

“As we communicate with other entities [we need to make sure] to not leave certain groups out,” Imler said. “But we don’t want to pull only from that group either. We are trying to represent YSU’s community accurately.”

Tressel said he demanded increased diversity among the presidential mentors when he first arrived at YSU.

“When I got here in May of 2013, there were 32 students and maybe three diverse students … The next year, we probably had 40 percent diversity,” Tressel said. “You have to be intentional about it. You have to sometimes grab people by the hand.”

“There is usually not a program or event that I have that President Tressel doesn’t show up at. He comes in and gives the welcome, or he shakes hands,” Blake said. “He makes himself available for what we have been doing.”

“He will always ask the questions,” Jones said. “But I feel like nothing ever happens afterward.”

Tressel recognizes that minority students remain skeptical. He believes that choosing people who are passionate about diversity and integration will allow them to carry the vision to others.

“Probably the biggest thing you fight on a commuter campus is you put on a lot of activities and then no one comes,” Tressel said.

“One thing that did come out of that was how many commuters came back to campus [for the Juicy J concert]. It was a nice percentage,” Imler said. “That is a start — to look at some of the things that students not living on campus would like to do and cater to their desires.”

“Once they are bolder, they will not be afraid to ask that question in class,” Tressel said. “I hope someday we do have that additional resources to do more things, but we are not going to use that as an excuse nor are we going to use the commuter thing as an excuse. It is what it is.”

The university is also in the process of transforming the entire first floor of Jones Hall into a multicultural center that will — along with the Culture of Community — attempt to better serve minorities.

“We do know that a lot of our underrepresented minorities have one, two, three part-time jobs; they have families,” Imler said. “There are so many other factors that keep them from being involved in campus activity. And their course load, sometimes that is interrupted by family situations. There are a variety of factors that can inhibit that.”

They plan to convert the third floor of Jones Hall into a student success center to help meet academic needs. Further down the road, Tressel would like to open up Kilcawley Center.
“It is so carved up [right now] that if you want to go sit down with six people, you are segregated,” he said.

Imler stressed that these efforts will not force assimilation, but prioritize minority students’ place on an active, integrated campus.

“We aren’t going to come together and be the same — how boring would that be?” Imler said. “There will be a lot of things that we disagree with, but we can respect it.”

“We have been lied to about being in a colorblind society, which is bullshit,” Anderson said. “Because we have been taught to be colorblind, we are instead becoming race ignorant.”

Imler said this commitment to diversity is oriented toward educating the non-diverse population. She said professors have to adjust their teaching style to respond to students’ feelings of alienation.

“You teach the way you were taught. … So your instruction should be a diversity of approaches, not just one method,” she said. “Not one culture learns the same way. Within each culture, you have subcultures. They are different. … In the public education arena, if we are really doing right by our students, why wouldn’t each student have an individualized public education plan.”

Though the Culture of Community could help, Imler and Blake also recommended diversity seminars or training reflecting Safe Zone Training.

YSU student Ja-Michael Johnson said if he had not sought it out, he would have never learned about his heritage because of the euro-centric scope of American curriculum.

“We are all taught to live the same, do the same, but the curriculum isn’t for our people,” he said. “If I didn’t look for the knowledge myself, I would only have learned about black history during one month in February. That is where the problem lies.”

Tressel said this needs to change because universities were created to foster responsible citizens, as well as provide knowledge.

“It has got to be a mass wave,” Tressel said. “It has to be woven into the curriculum of every class, even if it is not in the subject matter.”

Anderson and several students agreed that requiring diversity classes for all students may help raise students’ awareness of the experiences students of color have on campus, even if there is some initial resistance.

“People don’t want to sit in the class and talk about people of color all the time,” Shienne Williams, an Africana studies major, said. “Well, what about us? We talk about white people all the time.”

She asked a professor how Christopher Columbus discovered America when there were already people living here. He said Columbus was the first European to discover America.

“How do you disregard every aspect of humanity but your own?” Williams asked. “It is inhumane, and you are educating people to think ‘The world is only me. There is nobody else.’”

“I think to see racial reconciliation on this campus, we first have to understand that this is a hard issue,” YSU student Davon Bonner said. “Realize that maybe the idea of racism was inherited … was a problem in your heart, but you became aware of it and decided to address it.”

He said some people need the truth presented to them, and people should discuss the issue with their family.

“I think opposition will come, but we have to be more than willing to explain to them why racism is a problem and why black lives matter,” Bonner said. “This is something I am interested in because I am a Christian — this is at the heart of my belief.”

This is the fourth of a four-part series entitled “Black at YSU,” examining the experiences of black students on campus.