Saudi Arabian music filled the air as people dined on Middle Eastern cuisine. A video detailing Saudi Arabian cultural elements, such as their cities and monuments, was shown to the audience of about 180 people. 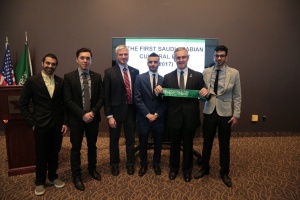 “In the past, the Saudi student population was too small to have an event like this,” he said.

During the opening speech, Nathan Myers, associate provost for International and Global Initiatives, said the growing number of international students enrolling at YSU is making the campus stronger.

“The Saudi student population brings so much to us. Not only your academic contributions, but your cultural contributions,” he said.

Rakan Alsulami, president of the Saudi Student Organization, said the goal of the event was to engage people with the Middle Eastern culture, despite negative media portrayals, and give the community a chance to meet Saudi Arabian people.

“People think that bad people are in the Middle East, they think we are unhappy and don’t have fun,” he said. “But this event shows who we are. We celebrate and have fun. We are peaceful people.”

The key to learning about another culture is coming to events and meeting people from different cultures, even if it feels uncomfortable, Khalil said.

“I think the secret of learning about our culture and being diverse is getting in your uncomfortable zone,” he said. “If you’re always comfortable then you’re never going to grow or develop. But if you step outside your comfort zone, you try new things.”

Khalil noted that many American students come to International Coffee Hour events and have become good friends with international students.

“That’s what we would like for the community to do. Don’t judge a book by its cover, get engaged with these events and give us a chance,” he said.

“Abdullah and his friends break the stereotypes. They were very similar to American students,” she said. “To break these stereotypes, you really have to get to know people. Just love people and be accepting. Show them the best of America.”

Amongst the guests, there were people from Akron, Cleveland, and friends from Youngstown.

Sam Fabrizio, a political science administration student, said he came to support Khalil and their other international friends.

“Abdullah has always talked about Saudi Arabia and how great of a country it is, so basically, I just wanted to immerse myself in the culture for a day,” Fabrizio said.

The event occurred a week after Saudi Arabian Prince Mohammed bin Salman visited the White House to talk to President Donald Trump about tackling terrorism in the Middle East. Hael Alyami, a speaker at the event, said the prince’s efforts should bring positive attention to Saudi Arabians.