The Youngstown State University chapter of the American Chemical Society performed experiments for children in the Success After Six program at the Youngstown Community School on March 28.

Harley Parker, member of the Youngstown State University American Chemical Society, said some of the students from the Success After Six program thought the chemistry experiments they demonstrated was magic. 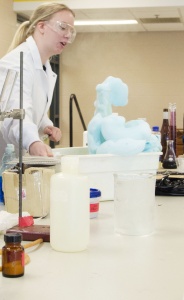 “The younger kids thought it was magic instead of science, but the kids were really excited about it,” she said. “They had a bunch of questions.”

The group has done demonstrations for children at other venues, such as OH Wow! Center and the Canfield Fair, but it was the first time they have had an event for Success After Six.

“One of the activities we enjoy doing is chemistry shows for area school children and other events,” Sam Kulifay, vice president of YSU ACS, said.

Samantha Mock and Joe Pallone, members of ACS, showed about 100 children demonstrations such as producing a ball of fire by blowing fine powder through a candle flame and oxidizing a gummy bear to produce sparks.

Kulifay secured funds from the YSU Student Government Association to purchase 50 ACS t-shirts, and some of them were given to the children as prizes. The rest were donated to the in-school store, where students purchase items based on credits they earned in the classroom.

“We hope to peak their interest in science and give them incentive to apply themselves in school,” Kulifay said. “Hopefully this will stimulate interest in STEM fields and steer a few of them toward rewarding careers in such fields.”

Michael Serra, the advisor of the YSU Chapter of ACS, said he is always impressed by how much time and energy the team contributes to the society.

“I think they are a great asset to the chemistry department and great ambassadors for chemistry,” he said.