There was a time when Youngstown had a resounding pulse stemming from a bustling downtown. The bustle was created from shopping centers and entertainment venues such as movie theaters.

Youngstown’s past was rich in theater. Mahoning Valley Historical Society’s Executive Director Bill Lawson said there were roughly 30 theaters in downtown and the surrounding areas during the 1920s.

The writer of “Historic Theaters of Youngstown and the Mahoning Valley,” Sean Posey said the earliest note of nickelodeons, theaters having an entrance fee of a nickel, was around 1905 in Pittsburgh, and as early as 1906 the theater trend could be spotted in downtown Youngstown.

People who ran movie theaters downtown in the 1940s were trying to figure out ways they could separate themselves from the pack. Theaters diversified themselves by screen size, showing not only film, but live acts as well, and by what they would and wouldn’t feature. 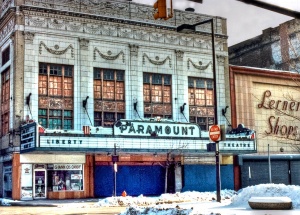 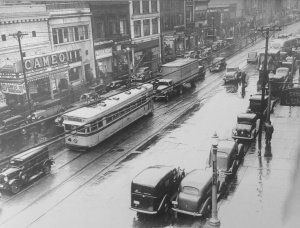 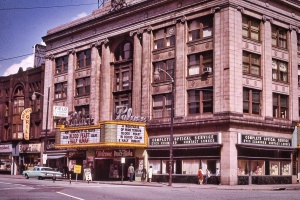 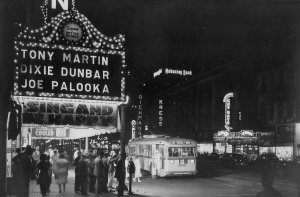 Posey spoke of the Regent theater, a theater in the 1940s that showed what were called race films: films with a predominantly African-American cast. The theater also catered to African-American audiences. This theater was located near what is now the Eastern Gateway Community College.

Bill DeCicco grew up in Youngstown in the 1950s, and recalled the most popular theaters downtown were the Palace, Paramount, State and Warner Theater. All have since been torn down with the exception of the Warner Theatre, which is now Powers Auditorium.

The theater DeCicco and Posey both spoke very highly of was the Palace Theater, which sat on Central Square. Posey said when the Palace Theater wasn’t showing films, it also dabbled in live performances like vaudeville acts and big bands.

DeCicco also said the Palace was large, capable of seating roughly 2,500 people. Posey said the theater attendance downtown declined slightly in the 1950s and ’60s because of TV and the growing trend of the drive-in theater.

“Theaters began to move out of downtown, and my generation began to see movies near malls or rent movies,” Peyko said. “Over time, there were no theaters left downtown.”

For Peyko, what’s gone is gone. He doesn’t feel it would be possible to turn downtown into the theatrical destination it once was. Lawson said the entertainment venues in downtown may grow, but in a different direction of movie theaters.

“In the future, there may be a movie theater, but downtown is becoming a more full-service neighborhood than a central business district,” Lawson said. “The way we consume movies is changing, and I’m not sure where motion pictures will be shown 20 or 30 years from now.”

Posey said he would like to see another theater downtown, but he’s unsure if people agree with him. He said Powers Auditorium is still capable of showing films, and thinks it would be enjoyable to show throwback films there, but management at Powers would have to see people interested in it.

It may be difficult for downtown Youngstown to be the cinematic destination it once was, but this may be because people are looking to create a new downtown different from the past, and different may not be a bad thing.