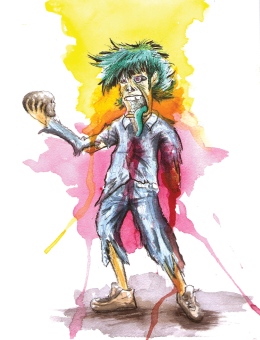 Zombies will come out singing at the Calvin Center on Friday for the opening night of “Living Dead: the Musical.”

Marisa Zamary, a Youngstown State University student, choreographed and stars in the original musical put on by the Rust Belt Theater Company.

The musical is an adaptation of the 1968 independent horror film “Night of the Living Dead.”

Zamary will play the part of Judy, one of the teenagers attacked by zombies.

Zamary said the show is an innovative representation of “Night of the Living Dead.” She was one of the founding members of the theater company, which was created to premiere locally written works that encourage social change.

“It’s very campy, kind of out there and crazy,” Zamary said. “But it’s a lot of fun. It’s a very upbeat, funny show.”

Joki said the musical parodies and makes light of the creepy-crawly aspects of “Night of the Living Dead.” The script is entirely original, with only the plotline borrowed from the film.

The cast of the show had only three weeks to prepare for opening night, spending five nights a week working on blocking, music and lines.

“We’re kind of putting it up very quickly,” Zamary said.

Since its inception in 2010, the theater company has staged “The Rocky Horror Picture Show” around Halloween, but its founders wanted to try something new this year.

Zamary said she and the other founders of the theater company did fundraising in its early days to provide lighting, costuming and sets.

“It was definitely difficult starting from the ground up,” she said.

All performances will begin at 8 p.m., and midnight shows will be staged on Oct. 26 and Nov. 3.

The Calvin Center is located at 755 Mahoning Ave. Tickets are $15 for adults and $10 for seniors and students.