YSUscape announced its successful completion of Phase 1 of the Utility Box Vinyl Artwork Project on Nov. 17. The majority of artwork has been installed in the downtown Youngstown area.

Daniel Bancroft, president of YSUscape, said the artwork is installed on utility boxes as a vinyl sticker.

Bancroft said YSUscape received a $5,000 grant in the spring through the Neighborhood SUCCESS Grant from the Raymond John Wean Foundation, which is a local foundation in Warren, Ohio. 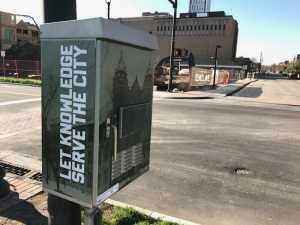 He said members of the group have seen utility box art in other cities and universities and wanted to bring it to Youngstown.

“So far, we have 15 designs that we are going to install, and around five have already been installed,” Bancroft said.

“Right now, our focus is just on downtown, but hopefully in the future we will expand to Wick Park and corridors going into downtown,” Bancroft said.

Arielle Pilolli, a YSU student and local artist, said public art is important to the community, according to a press release by YSUscape.

“Art brought into the public space allows for a group, an individual or anyone outside of a traditional gallery space the opportunity to experience art open and freely,” she said.

She said the Utility Box Project helped to engage diverse groups of people in the Youngstown community to participate. 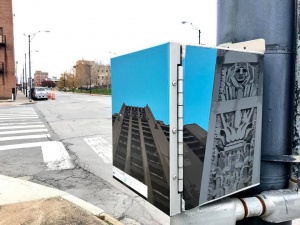 David Tamulonis, a YSU graduate and local artist, said he was glad to have the opportunity to design for the Utility Box Project, according to the press release.

He said efforts like this set an example for upcoming students and current residents of Youngstown.

“As a resident of Youngstown and a graduate of YSU’s Williamson College of Business and College of Creative Arts and Communications, I am very pleased to see public art initiatives being implemented by this active and dedicated group of students,” Tamulonis said.

Phase 2 of the project will be completed soon, and YSUscape plans to expand the project in the spring 2018 semester.

Bancroft said it has been a focus of YSUscape to bring more public art into Youngstown and it is something on a smaller scale that can be done.