YSUscape completed Phase 1 of its Crosswalk Buckets and Flags project, which was created to improve pedestrian safety, on Dec. 18.

YSUscape President Daniel Bancroft said the idea of this project began in spring 2017 from seeing how other cities around the country utilize crosswalk buckets and flags.

“This idea is having a PVC bucket on both sides of a crosswalk and then putting in crosswalk flags in those buckets,” Bancroft said.  “Our flags are bright orange, so you can see them in day, at night. People can carry them across the crosswalk or intersection with them.”

He said the flags can be used by pedestrians to show drivers their intent to cross the road or to make themselves more visible. 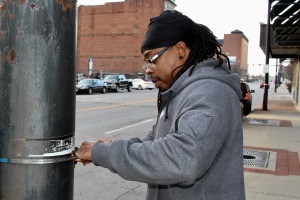 According to a YSUscape press release on Dec. 18, there were 221 vehicle crashes, with 15 being fatal, involving pedestrians from 2007 to 2016 on YSU’s campus and in Youngstown. Most of the accidents occurred around YSU and Downtown, as reported by the Eastgate Regional Council of Governments.

Additionally, the press release stated that according to the Governors Highway Safety Association, 6,000 pedestrians were victims of vehicle collisions in 2015 and they account for 15 percent of traffic deaths in the United States.

“It’s no coincidence that the highest number of incidents are around downtown and the university where the most people are, so we looked at which intersections were the worst,” Bancroft said.

YSUscape Secretary Lukas Darling said in the press release that the goal of the project was to make pedestrians feel safer when they cross the street.

“By doing small projects like this, we can help to increase pedestrian safety and the quality of life in Youngstown — it’s the little things,” Darling said.

First Ward Councilman Julius Oliver said he is grateful to YSUscape for the accomplishment of this project. 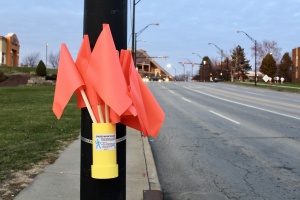 “It gives everybody a chance to look out for their neighbor and cross the street safely,” he said.

The crosswalk buckets and flags are located at six intersections in downtown Youngstown and throughout YSU’s campus. These locations include the intersection of Phelps and Front Streets, where a pedestrian, who was crossing the street, was hit by a vehicle, according to the press release.

Phase 2 of the project will be completed during the spring 2018 semester.