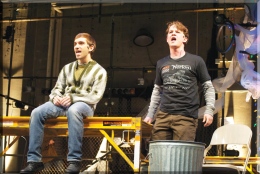 YSU students perform during dress rehearsal on Tuesday in preparation for the opening weekend of “RENT.” The musical opens Thursday at 7:30 p.m. in Bliss Hall’s Ford Theater. Photos by Marissa McIntyre.

Beginning Friday, students at Youngstown State University will sing in protest against a money-hungry philanthropist and not pay their rent. They’ll also address HIV/AIDS and drug addiction, among other serious subjects.

And it’s all happening on stage at Bliss Hall’s Ford Theater during University Theater’s performance of the popular rock-musical “RENT.”

Eric Shonk, a musical theater major at YSU, is playing the role of Benjamin “Benny” Coffin III, the play’s antagonist who used to be friends with the other characters, but sold out and married a millionaire’s daughter.

Shonk said when he found out that the department would be doing “RENT” as the fall musical, he cut himself off from all other versions. Although it’s one of his favorite musicals, he hasn’t listened to any soundtracks or watched the movie version since May.

Shonk said he wanted to approach the role of Benny in a different way. He questions if Benny’s motivation for evacuating the residents was money, or if it was a desire to make their dreams a reality before they die.

“Essentially, in this play, your friends are dying,” Shonk said. “I see he’s trying to get that dream alive. He’s doing what he and his friends always dreamed of.”

Kylie Davis and Carly Magnuson are sharing the role of Mimi Marquez, a firecracker stripper who struggles to make ends meet in New York City while battling disease and addiction.

Davis said she has a close connection with “RENT” and has wanted to play Mimi since she first saw the musical.

“From the second that I saw ‘RENT,’ it has changed my life in so many ways,” Davis said.

Davis, a freshman theater major, said she and her co-stars were ecstatic when they found out they were cast, jumping and hugging one other in excitement.

Davis said performing the role is a fun challenge — “especially at the end where she is basically dying.”

Students are also working to pull the audience into the performance with behind-the-scenes work.

“We have cool special effects to help the audience feel what the characters are feeling. It’s also a rock-musical, so the lights have more of a rock feel,” Cummins said.

Cummins is controlling 280 lights on the stage. He said he’s been interested in light design since he was 13 years old, and he jumped onto the opportunity to do lights for “RENT.”

Scott Irelan, director of “RENT” and chair of the theater and dance department, said he grew up with the musical and has seen how it’s developed from workshopping to Broadway.

Irelan has been following “RENT” since its breakout in 1996. He said the stage setup was inspired by the old-school version instead of the modernized version depicted in the 2008 movie.

The stage setup has a desk at center stage, along with piping the characters dance around, a pay phone and an answering machine. No set changes occur throughout the performance.

Irelan also helped students develop their own versions of the characters by discussing the issues in the musical.

“We had a lot of discussion about what it meant to be alive with these struggles,” Irelan said.

Since the play has characters living with HIV/AIDS, Irelan said he wanted the students to grasp the severity of the disease.

“Bringing that gravity was enough to get them into character,” Irelan said.

He gave the song “I’ll Cover You,” which is sung between the characters Collins and Angel, as an example.

“It’s about two people who are connected. They both have AIDS and know they’re both going to die, but they’ve made a commitment to be with each other knowing this,” Irelan said.

Shonk said those interested in attending the performances shouldn’t anticipate a replication of the movie version; YSU is doing things a bit differently.

He said the play is about celebrating life, and that’s the theme YSU tried to bring out.

“Like the song ‘Seasons of Love’ says, how do you measure a year? Go for the meaning behind this play, which is a celebration of life,” Shonk said.