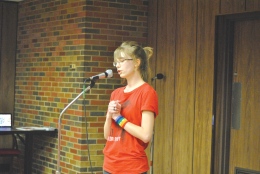 Hannah Jefferson sings a Taylor Swift song during tryouts for a talent show that will be hosted by YSU’s chapter of the American Marketing Association. Photo by Taylor Phillips/The Jambar.

Dancers, singers, jugglers, bands and comedians showed up to Monday’s talent show audition night in Kilcawley Center’s Ohio Room. The main event, planned by Youngstown State University’s student chapter of the American Marketing Association, will be held in the Chestnut Room on April 11.

During an AMA meeting, Vice President Amy Perotta came up with the idea to create YSU’s own version of “America’s Got Talent.” Then, on Monday, AMA members set up a performance stage, stereos, a video camera and microphones for contestants.

“We have one of the best art schools in the United States. We want to give local talents the opportunity to see some recognition,” Perotta said.

Drae Smith, a YSU student, will kick off the April 11 talent show with a hip-hop performance. Smith has shared the stage with national recording artists Wiz Khalifa, Machine Gun Kelly and Yelawolf.

Chad Zirafi, YSU senior and AMA president, said he didn’t think the talent show would come to fruition as fast as it has.

“It all came together pretty quickly. We’re not being too selective as far as acts go. If you have an off-the-wall talent, you’re free to come audition for us,” Zirafi said.

AMA members also recruited judges to help facilitate the event. Nick Sainato, a YSU student and drummer of The Strange Familiar, will serve as the only student judge. Michael Pontikos, an instructor in the Williamson College of Business Administration, and Nancy Wolfgang, an instructor from the College of Fine and Performing Arts, will help Sainato narrow down the list of contestants.

The panel of guest judges will evaluate participants, and winners will have the chance to win prizes donated by local businesses.

“We wanted other people that have background within the arts and talent world to help judge with us,” Zirafi said. “We don’t want to offend or be unfair to participants performing.”

Zirafi said what first started as a simple brainstorm turned into an event that YSU students can become excited about.

Participants will be judged on overall skill, creativity and the audience’s reaction. The panel of judges will have the final contestants selected as early as Thursday.