Youngstown State University’s compliance with public records requests exceeds that of other Ohio public universities, yet only provided records in two out of five requests.

The Jambar asked for five records from YSU as a part of the Ohio Universities Public Records Audit. Of the five records requested, the Jambar received two.

Effective democracies require access to public records — records detailing the administration of a public office, including personnel files, contracts and salaries. Citizens use public records to hold governments accountable and prove corruption or inadequate rule. Beyond their watchdog utility, public records — such as census records — provide the public with access to valuable data about the world around them.

The specificity and currency of the records requested — general administrative documents from 2014 and 2015 — should have resulted in total compliance under the Ohio Public Records Law by the University. 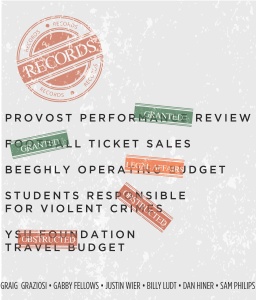 “If you go to an office looking to inspect a record, we may have to redact aspects of that record to protect personal information,” Jacobs said. “Somebody has to look at them first to make sure [no redactions are necessary], and that’s probably part of the delay.”

She went on to explain that University administration officials consider protecting students’ private information “sacrosanct,” resulting in some to err on the side of caution when allowing access to records, even if the records are public.

While Jacobs is correct that certain records may need review to ensure student privacy, four of the five records requested by The Jambar were financial or personnel records. Only one record — a request for a list of students involved in violent crimes during the 2014-15 school year — included student information. However, that information is undeniably public under state law.

Karl Idsvoog, associate professor at Kent State University and author of the book “Access with Attitude: An Advocate’s Guide to Freedom of Information in Ohio,” argues that while protecting privacy is important, it doesn’t undermine public record law.

“The university should know which records are going to have privacy problems and which should be freely available for inspection,” Idsvoog said. “It’s not unusual for a public agency — university or otherwise — to have a policy that conflicts with the law, but the law prevails.”

Jacobs agrees that more work could be done to improve YSU’s public records compliance, but feels both the university and the state have significantly improved access to documents.

“Do [administrative staff] go out every weekend and do public records training? No. And of course, there’s room for us to get better,” Jacobs said. “But I think [records compliance] is far better now than it was fifteen years ago, and I think it will continue to get better.”

A statewide breakdown of the data, including individual stories from participating universities, can be found at http://ohioaudit.org.