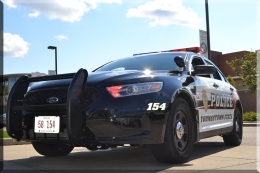 The YSUPD recently purchased the new 2012 Ford Police Interceptor when the former Crown Victoria Interceptors ceased production. The department hopes to add a new vehicle each year to patrol the campus. Photo by Kacy Standohar/ The Jambar.

The Youngstown State University Police Department recently purchased a new cruiser to patrol the campus. The 2012 Ford Police Interceptor, a Taurus, has more horsepower with better fuel efficiency than the previous cruiser.

“We’ve always had good luck with Fords,” he said. “It’s law enforcement friendly, even though it’s smaller on the inside and outside.”

Remias said the department spent a bit more than $23,000 on the new interceptor and an additional $4,000 for equipment.

Sgt. Dennis Godoy said the department is planning to transition away from the former Ford Crown Victoria Police Interceptors, which are no longer in production.

“These cruisers come with the police package,” Godoy said. “The engines are built to be faster, and they come equipped with two radios.”

Godoy said the new interceptor is comfortable but not as spacious as the Crown Victoria.

“It’s nice,” he said. “It feels more like you’re wrapped somewhat.” Remias said the former Crown Victorias had a V8 engine. They were also rear-wheel drive.

The new vehicle is a V6 engine but runs on all-wheel drive.

“It was redesigned,” Remias said. “The V6 engine will give us better gas mileage and more power. With all-wheel drive, the new vehicle should also help us through snow and slush on Fifth Avenue during the winter months.”

The standard V6 engine is projected to get at least 20 percent better fuel efficiency than the 2011 Crown Victoria Police Interceptor, according to the Ford website.

“YSU has been fortunate enough to give us money for a new vehicle each year. We try to retire one car a year,” Remias said. “But we need reliable cars to get from A to B, and we’ve had some real junk at one point in time.”

The police department is hopeful that the next purchase will be the Ford Interceptor Utility SUV, which will provide officers with more room.

“It helps us to stay proactive,” Remias said. “It just takes a little bit to get used to.”

Remias and Chief John Beshara were also able to work with a company to come up with a new design for the exterior of the vehicle.

“We used the YSU red on the outside with the police logo,” Remias said. “And we’ve gotten a lot of positive feedback since then. People love the look.” Youngstown, along with Austintown and Boardman, is also getting the new Ford Interceptor.