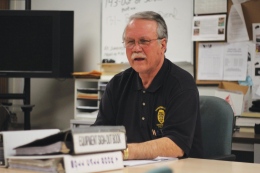 John Gocala, chief of Youngstown State University’s police department, spent his last day on the job Tuesday. His career comes to an end after 40 years of service to the Youngstown area. Photo by Dustin Livesay/The Jambar.

Growing up, John Gocala idolized police officers. With a family in law enforcement, it’s no surprise that he ended up following suit. Now, after a career of more than 40 years in the field, it’s coming to a close.

“For the past few months, I’ve been kind of lost,” Gocala said.

The bittersweet goodbye is dwarfed by the extensiveness of personal and professional accomplishments at both the YSU Police Department and the Youngstown Police Department, where he began his career.

Gocala began as a vice narcotics unit officer in 1971, where he combatted organized crime gambling rings, underage liquor sales and a city rife with prostitution.

“It was exciting,” Gocala said. “We brought down Mr. [Joey] Naples.”

Gocala was recognized with officer of the year honors for the gambling ring bust.

A change in administration led him to the uniform division where he was promoted to sergeant.

“We’d drive around in the master cruiser, break up bar fights if people got rowdy,” he said.

In 1980, Gocala was promoted to administrative aide to the police chief, where he oversaw the budget and the purchasing of police cruisers. He remained in the position until 1991.

“I knew I wouldn’t get a chance [to be chief] in the city because I didn’t live in the city,” Gocala said.

It was then he applied for and was awarded the position of YSU Police Department chief.

The ensuing years weren’t easy for the new chief. He dealt with limited space for his staff in the 2,400-square-foot Carriage House on Spring Street.

Shortly after his hiring, several members of his already small force faced retirement. He saw an opportunity for restructuring and reorganizing.

The excess funds from retiring lieutenants were used to hire more beat cops.

Soon after, the department found a new home on Fifth Avenue, across from the Mahoning County Jail. The station, once bleak, is furnished with state-of-the-art equipment that entices regional task forces to rent the department’s training room.

The facilities have drawn highly trained police enforcement counterparts from across the country, including the FBI.

“His knowledge and contacts in law enforcement field have made our jobs a lot easier,” Lt. Michael Cretella of the YSU Police Department said. “It’s offered [the officers] an opportunity to attend a lot more training.”

Gocala was more proud of the fact that all the upgrades were funded by drug forfeiture money.

“The dopers lost their money, and we used it,” Gocala said.

But Gocala’s biggest challenge is combating Youngstown’s bleak reputation, one besieged by high crime rates. He met this obstacle with rigid ferocity.

Campus crime statistics indicate that violent crimes have declined over the past five years, with theft the only remaining nuisance.

“The biggest problem is opportunity theft,” Gocala said, adding that students leaving backpacks or laptops unattended cultivate an environment for thieves to thrive.

Larceny and theft numbers remain high, but motor vehicle theft has decreased, with only one car stolen in 2010.

Gocala said he feels a greater police presence on campus wards off potential criminals, and Cretella said he believes this was one of Gocala’s greatest contributions to the station.

“[He’s increased] the number of officers we currently have, increased the size of the department,” Cretella said. “It’s an overall benefit to the department and the university.”

Cretella will serve as interim chief while a committee continues to search for a replacement. As the next highest-ranking official in the department, some would assume Cretella was poised to take the position full time.

“I didn’t even apply,” Cretella said. “I’m only going to be here so much longer. You have to think what’s in the best interest for the station.”

Ron Cole, director of university communications, said a replacement will likely be named in the next four to six weeks.