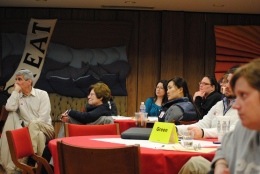 Participants in the Safe Zone training listen to Rick Morrow’s testimonial in the Ohio Room of Kilcawley Center on Wednesday. Photo by Evan Houk/The Jambar.

A crowded backwoods country bar falls silent. For a few awkward seconds, Rick Morrow, a nursing student at Youngstown State University, contemplates an answer to a question that would alter his life forever.

“Are you gay?” Morrow remembers a man asking from across the bar.

Morrow fumbled for an answer, but nothing came out.

“All eyes were on me, and I was afraid to answer because of what could happen,” Morrow said.

Morrow said his father tackled the question for him.

“Yeah. And if any of you motherf—ers has a problem with that, you’re gonna have to come through me,” Morrow’s father said.

This was the story Morrow offered as his testimonial at YSUnity’s Safe Zone training on Wednesday in the Ohio Room of Kilcawley Center.

Before this episode, Morrow said he felt insecure about his undeniable sexuality. He explained that all of his friends and family suspected he was gay, but he had never formally “come out.”

That night at the bar, he did.

Morrow spoke at the Safe Zone training, an event hosted by the on-campus gay-straight alliance, YSUnity, and the Safe Zone Advisory Council. His was one of the four testimonials given that day.

One goal of the Safe Zone training is to illuminate the struggles faced by the lesbian, gay, bisexual, transgender and intersex community when trying to fit into traditional cultural norms.

Since 1975, the American Psychological Association has been calling on psychologists to remove the stigma that homosexuality is a form of mental illness. Advocates at the training session said homosexuality is still perceived as an illness by many individuals.

The training focused heavily on accepted terminology and the difference between offensive and preferred language as defined by the Gay and Lesbian Alliance Against Defamation Media Reference Guide.

Most attendees expressed a genuine interest in learning about and better understanding the LGBTI community; a few others attended to collect bonus points for multicultural or ethics classes.

“I have a friend whose son is gay, and I didn’t want to be ignorant toward his sexual orientation,” Kelly Gorman said. “Plus, going into student

affairs and counseling, this training is a useful thing to have.”

The Safe Zone Advisory Council is a group of faculty members who organize and facilitate the Safe Zone training in order to create a campus community more open and understanding of LGBTI individuals.

YSUnity’s faculty adviser Brian Wells, who sits on the council, said the Safe Zone Advisory Council was formed in 2009 “in an effort to provide consistency to the program and to alleviate the student organization of the burden of the program.”

The Safe Zone training has taken place annually since 2004, when Wells said the focus was originally just “on the sharing of stories and personal experiences as a vehicle to enable allies to better support lesbian, gay, bisexual and transgender students.”

Those who complete the training and sign the Safe Zone Ally pledge are welcome to take a small Safe Zone sticker to display in their workplace. The sticker signifies that they are a certified ally and are ready and willing to offer support to any troubled or discouraged LGBTI individual.