The Association of Classified Employees, which includes about 260 support staff on campus such as secretaries, IT, facilities and grounds, has been negotiating their contract since August 14.

Jill Mogg, crisis communication chair for the ACE Union, said they are only looking for an equitable contract and to be treated fairly by administration.

Staff have done a lot of extracurricular activities on campus that aren’t part of their job duties, including fundraising for the Youngstown State University food pantry and giving scholarships each spring, Mogg said.

“We’re pretty active on campus, and we just really want to be treated fairly,” Mogg said.

HaSheen Wilson, a network administrator at YSU for 16 years, said he believes the relationship between ACE and the administration has been fractured.

“The administration does not view ACE members as a respected integral part of operation to the university,” he said. 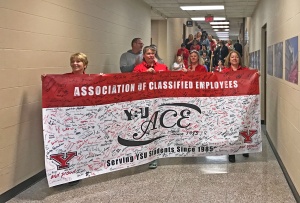 In 2014, a contract was imposed on ACE members.

“If you value employees, you would think that you would respect the collective bargaining process and get to an amicable agreement,” Wilson said.

Wilson said he thinks it’s important for the administration to understand they are not asking for anything they haven’t shown they deserve.

Cassie Nespor works in the university archives at Maag Library and runs the Melnick Medical Museum.

“You can’t just train a student or hire someone randomly with a general education background to do what I do,” Nespor said. “It doesn’t make me feel very appreciated or respected when I feel like the university keeps expecting us to give back and give back and we don’t get much going the other way.”

According to Nespor, there used to be 40 people working in the library and they now have a little over 20, so everyone has taken on more work. She said it’s like that in every department.

“So, when the administration says ‘Oh, we’re getting raises because we’re doing more duties, we’ve accepted more responsibilities,’ well, everybody on campus has been doing that,” Nespor said.

Wilson agreed administrators have been getting more work as well, but said they are being compensated for that while ACE members are not.

“From our perspective, it doesn’t really look like they’re suffering as we’ve suffered for the past six years, quite honestly,” Wilson said.

Shaun Toth, an electrician in the union, said he hasn’t seen any improvements since he began working at YSU six years ago.

Toth said he received a two percent raise in his third year at YSU, but the cost of living has gone up more than that. He said his wages haven’t been keeping up with the economy.

“Everybody around here thinks that YSU is such a great job, and there’s no increase in anything,” Toth said. “We’re pretty much staying at the same rate, even going further behind.”

Nespor said she has been at YSU almost a decade and has only seen one good contract.

Negotiators are down to several issues, similar to what the OEA took to the fact-finder recently.

“It’s been moving along for the most part, and I think we’re going to take a few of our articles to fact-finding in order to get it wrapped up,” Mogg said.

Mogg said they are far from a strike yet, and everything has been in good faith.

“I believe the university is a place people want to work. It’s just that members who have been here working feel abused, overworked and undercompensated,” Wilson said. “That’s what I have been seeing with our members.”

Although ACE members are heading to fact-finder for their contract, they are still proud members of the YSU community.

“We’re trying to keep the university top notch, as we all want to be Y and Proud. And we are, we are very Y and proud,” Mogg said. “We have a little saying, ‘YSU works because we do,’ because there isn’t a corner of our campus that isn’t touched by our staff.”