They say imitation is the sincerest form of flattery. For Amber Kempthorn, an art professor at the Cleveland Institute of Art, the imitation she creates within her work is a tribute to the world around her.

She creates her pieces by first working sticks of pastel into the canvas, and then through a combination of processes, she adds airbrushing, stenciling and drawing to create a collage in both mediums and metaphors.

“It’s kind of record keeping, and I think that’s important to me as an artist, because I feel a responsibility to be reflective of the times in which I live,” Kempthorn said. “I want to be engaged in the culture around the world I live in. I want to be cognizant of what’s happening around me.” 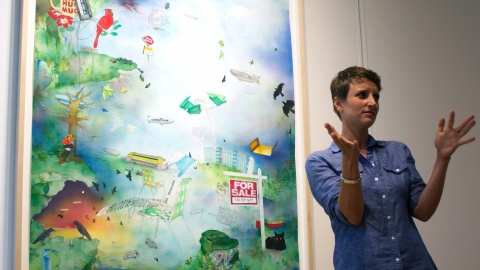 Kempthorn boasted about a collection of retired library books from the 1920s to the 1960s that she utilizes to add to her collage. However, she doesn’t use these books in a traditional sense. Because of the era of the books, there are many hand-drawn pictures within them that Kempthorn feels the need to repurpose and preserve as part of her work.

Kempthorn described herself as being the mockingbird of the art world. She said that she is a visual mimic or a thief of the culture around her.

“Mockingbirds are the artists of the bird species,” Kempthorn said. “They recreate the world from the world around them. They take scraps and snippets to create something new, and the same could be said for my practice.”

Kempthorn stated that she feels a connection to each drawing or stencil or repurposed floral drawing that she adds to her work. She gave an example of an old pair of tennis shoes. She said that everyone has an old pair of shoes, but for some people the thought of those shoes opens up a flood of memories that takes one back to past times.

“I think a lot about the importance of the way we assign a value to certain things,” Kempthorn said. “Ordinary objects become reflective of our humanity.”

Claudia Berlinski, an art professor at YSU, said that Kempthorn creates pieces so unique it makes them hard to explain.

“Her work has a surreal sense of wonder to it,” Berlinski said. “Each piece has multiple references and metaphors, and yet, they’re hard to define, and I think that’s a strength in her work.”

Kempthorn told the audience that she embraces the mystery that her work creates, and she would never want to define the meaning of a piece of her work, but rather let the viewers interpret each piece for themselves.

“That sense of wonder is important to me,” Kempthorn said. “I identify as a storyteller, but it’s not a narrative. It’s more along the lines of poetic passages to me. There are a lot of different things happening all at once, and it gives viewers space to build the story for themselves.”

Christine McCullough, an art professor at YSU who helped to bring Kempthorn to the university, said that Kempthorn’s work is inspiration due to its interpretive nature.

“Her work can be interpreted in many different ways,” McCullough said. “It makes you wonder, and it makes you question. Each person can bring their own background to a piece and make their own individual narrative of her work.”