YSU Students Hold Their Own at National Moot Court Competition.

In moot court, teams argue constitutional issues before a panel of judges, similar to arguments made before the United States Supreme Court.

Nearly 400 teams compete at regional tournaments nationwide with 80 qualifying for the national tournament. Only once since 2008 has YSU failed to qualify at least one team for the national competition. This year, two teams qualified: Jacob Schriner-Briggs and Andrik Massaro’s team and Jillian Smith and Michael Marshall’s team.

The national competition stretches over two days. Everyone participates during the first day, with 64 teams qualifying for an elimination-style tournament the following day. 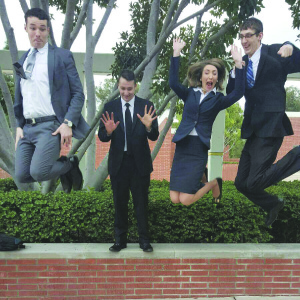 Smith and Marshall missed qualifying for the elimination round by one ballot. Schriner-Briggs and Massaro made it to the round of eight before being eliminated with Schriner-Briggs ranking as the competition’s third best orator.

Schriner-Briggs had previously placed third in the national competition during his freshman year at YSU.

“It was really cool to have that come full circle for my last competition,” Schriner-Briggs said.

Paul Sracic, YSU’s chair of the department of politics and international relations, served as the moot court coach this year. He said moot court is one of the most difficult intellectual exercises in which an undergraduate can engage.

“They really have to be able to think on their feet, and that’s what makes it such a challenge,” Sracic said. “Not just knowing the information, but being able to creatively answer questions based on that information.”

The students receive a case problem in May and have to study the case and 20 accompanying decisions by the Supreme Court and various circuit courts. They need to be able to argue both sides of the case.

“This is very, very difficult to do, and we’re very proud of the fact that our students consistently do so well in moot court,” Sracic said.

Schriner-Briggs said it was humbling to place third overall, given the level of competition at the event. He attributed his success to Sracic and previous moot court coach attorney, Ronald Slipski.

“We’ve had good people working with us. I think that’s the biggest reason as to why YSU has done pretty consistently well over the last five or so years in moot court,” Schriner-Briggs said.

Smith, who had never competed before, said Slipski along with appellate Judges Gene Donofrio and Mary DeGenaro played a large role in preparing her for the competition.

“They would let us come over to the court of appeals in a real courtroom and argue in front of them,” Smith said. “[The judges at the tournament] were asking incredibly hard, difficult questions, but I felt that we had been very well prepared by the volunteers that we had.”

Smith said participating in moot court has been a valuable experience.

“It is one of the best introductions to the practice of law that someone could possibly have,” Smith said. “The analytical skills that we developed in this are things I’m going to carry with me whether I actually end up practicing law or not.”

Schriner-Briggs said the knowledge he’s gained about constitutional law is even more important than the competitive success.

“Moot court has confirmed for me my desire to actually practice law in the real world,” Schriner-Briggs said. “I’ve fallen in love with constitutional law because of moot court.”

“For a long time, I was very much back and forth on that, but this convinced me that that’s definitely a route I want to take because even though it’s difficult and can be scary, that’s also what makes it fun,” Smith said.

Schriner-Briggs said he’s grateful he’s had the opportunity to participate in moot court.

“It was a wonderful opportunity, and not many students necessarily have access to that opportunity, so I’m definitely grateful for that,” Schriner-Briggs said.

Sracic said YSU is the only public university in Ohio that has a moot court team. In reaching the round of eight, Schriner-Briggs and Massaro bested teams from the University of Virginia, the University of Chicago and Duke.