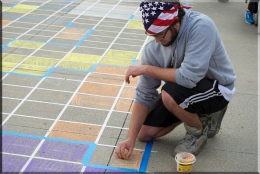 Zach Repphun colors in a block on the YSU chalk mural, which he designed. Photo by Marissa McIntyre/The Jambar.

Bystanders later chalked in those squares, about a square foot each, in exchange for candy and a chance to “beautify campus,” Repphun said.

Repphun organized the event as part of a class project designed to unite members of the university community in bettering campus spaces.

Repphun had the idea to get the Student Art Association involved, and the project picked up speed.

“I think it’ll be a good attention getter for the Student Art Association. I don’t think this has ever happened on campus as far as I know,” he said.

Beginning at 11 a.m., members of the Student Art Association began recruiting pedestrians, and by 2:30 p.m., the 20-by-40 mural displayed YSU’s letters next to a pumpkin.

Chelsee Teleha, a freshman business major, began the project with Repphun for their communications class.

“I am pleasantly surprised by the turnout,” Teleha said. “It’s easy, color by number; you don’t need to have any drawing abilities, and it’s been fun.”

Repphun and Teleha said they were worried about the weather in the days leading up to Wednesday.

“I checked the weather, and it’s not supposed to rain. So, that’s a good thing,” Repphun said on Oct. 10.

Pam Sajnovsky, president of the Student Art Association, said the organization would typically hold a bake sale. However, the chalk mural is a way for the group to not only beautify campus, but to also get word out about their group.

“Usually, we don’t get to get out of Bliss Hall,” Sajnovsky said.

She said the Student Art Association was on hiatus for a year, and this year, group members are focusing on getting the organization’s name out, as well as using art to bring light to the area.

Bren Munroe, secretary of the Student Art Association, said this was also a good way for students to spend time on campus.

“I don’t think people spend time on campus, so this will be a good opportunity,” Munroe said.

Michael DeCristoforo, a sophomore fine arts major, passed by and said he had fun filling in parts of the mural. He began sporting chalk dust on the outside of his sweatpants, hoodie and hands.

“They keep offering me hand sanitizer, but I’m just like, ‘It’s art! It’s supposed to be messy,’” DeCristoforo said.

The Student Art Association is open to all students. The members said that being involved opens up possible career opportunities and allows non-art majors to explore their hobbies.

“I think people are intimidated by art. But if your hobby is photography or painting, it’s a good way to get experience,” Munroe said.