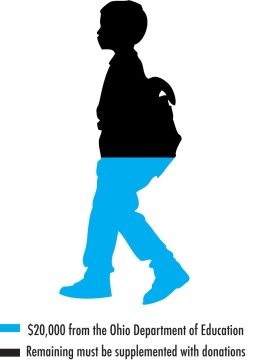 It costs up to $40,000 per year for each student to attend the Rich Center. Graphic by Keeley Black/The Jambar.

The Rich Center for Autism at Youngstown State University spends much of each year trying to make ends meet.

The nonprofit organization operates tuition free, and because it doesn’t receive money from YSU, it covers the majority of its operational costs with state autism scholarships offered by the Ohio Department of Education to each student at the center.

The scholarships cover about $1.3 million, but J. Georgia Backus, the center’s director, said the remaining funding, which amounts to roughly $500,000, comes from fundraising and donations.

“That’s why we depend on the kindness and generosity of this campus and its students,” Backus said.Lita Wills, associate director of development at the Rich Center, said, in total, campus organizations gave $7,000 over the last two years.

Among those donating are YSU student groups, including Alpha Phi Omega, Alpha Xi Delta, the YSU Department of Nursing and the Leslie H. Cochran University Scholars.

Backus said the donations from campus organizations help ensure that no autistic child is turned away based on financial ineligibility.

Alpha Zeta Delta hosted an annual event up until this fall to raise money for the Rich Center. Sorority members chose this year to switch to a national focus and donate to Autism Speaks.

Their prior annual fall event, the Jail ‘n’ Bail, allowed campus members to purchase warrants to “arrest” friends and faculty members who would then be imprisoned in a makeshift cage outside of Kilcawley Center. To free themselves, those imprisoned had to raise bail money from passersby.

Kayla Micco, philanthropy chair of Alpha Xi Delta, said the fundraiser usually brought in between $1,000 and $2,000.

“What they do is sort of what I do but on a smaller basis,” said Tricia Perry, coordinator of events management for the Rich Center.

The Rich Center does not solicit donations from student organizations, and Perry said they come as a welcome surprise.

“It’s very, very welcome,” Perry said. “Is it the biggest donation we ever get? No. But it’s very welcome.”

Most recently, the University Scholars raised $2,000 for the Rich Center with a change war between the four classes of scholars.

For one week, four jars were set out at the front desk of the Cafaro House for donations. Coins were positive, while dollars were negative, and students competed to net the highest amount of money. Cory Okular, a University Scholar, said the scholars had a positive experience donating to the Rich Center last year and chose to donate again.

Another campus group donated to the Rich Center this year and hopes to make its event an annual one. Six of YSU’s nursing students, with the assistance of nursing faculty, also organized a golf outing to raise money for the Rich Center earlier this year.

“We were really proud that we were able to raise as much money as we did with such a small group of organizers and participants,” Bosley said.