Youngstown State University students gathered at YWCA on Monday to read their poetry about accounts of sexual assault and abuse. 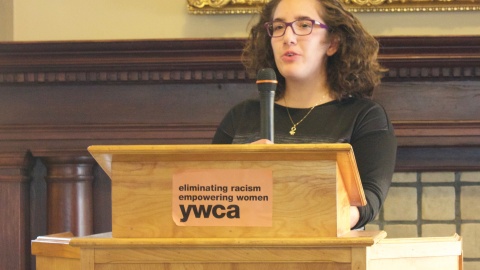 The event, Words that Heal, was organized by YSU’s Chapter of the National Organization for Women, the Students’ Literary Art Association and Sisters with a Vision.  Leah Meritt, the CEO and president of YWCA, said the event was held for Week without Violence, which takes place every October.

More than 10 YSU students shared poetry at the event. Marissa Gray, a YSU student who coordinated the event, said the purpose of the reading was to spread awareness of gender-based violence, which tends to be high on college campuses.

“This is a great way to express our truths in a way that’s a little unconventional and very personal in a creative way of doing so,” Gray said.

Gray said she has encountered assault on a personal level, so the issue is very dear to her heart. She said it is important for women who experienced assault to have a place they can discuss their accounts without being judged.

“We’re really about forming a community of empowerment and a community of strength,” Gray said. “A community where survivors can feel welcome, empowered and together. We can go together as one as opposed to feeling stuck in the shadows or forgotten.”

Sarah Davis, a YSU student who read at Words that Heal, said it’s important for victims of gender-based violence to have an outlet to talk about it.

At the event, Gray read her own piece titled, “The Question,” which asked the audience who the other five women are in statistics where one in six women are victims to assault.

The poem was a combination of pre-written verse and words that came to Gray in the moment. She said reading poetry is a way to help deal with past trauma and open up to others.

Each reading was followed by applause and several readers were inspired to share their experiences by others who spoke out at the event. Merritt was moved by the students’ readings.

“Some of the stories were very impactful and powerful,” Merritt said.

Gray said she was proud of all of the students who shared their stories at the event. She said this is the starting point for eliminating survivors’ fears of coming forward.

“The only thing that’s more powerful than the silence that shrouds sexual assault and violence is our voices,” Gray said.

Another poetry reading is planned for Women’s History Month in March.