Students competed in the popular video games Super Smash Brothers Melee and Mario Kart 8 to raise money for an animal shelter in the Chestnut Room on Thursday. 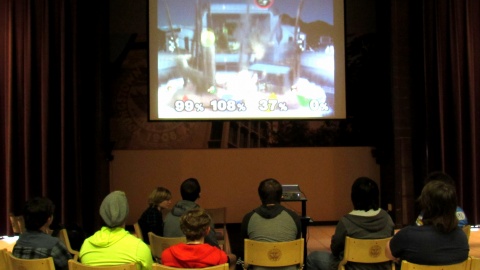 The fundraiser was put together by a group of students in their intro to honor class. For their project, they needed to do something that would help the community. Someone in the group suggested that they help a local animal shelter.

The fundraiser’s proceeds went to New Lease on Life. The prize for the winner of the video game tournaments was a $20 Amazon gift card. Briana Schumacher, a pre-vet student, had the idea for helping New Lease on Life.

“New Lease on Life is a nonprofit organization entirely run by volunteers, and they really needed some help,” Schumacher said. “So the idea is to paint the front of their building to make it look like an animal shelter, because right now there’s a sign saying it’s a furniture store.”

Schumacher said people are more likely to engage in a fundraiser that involves a fun activity rather than selling a product. Mauk agreed.

“I thought it was definitely well worth doing, because I know a lot of people came out to play games and have a tournament,” Mauk said. “I think we raised more that way then we would have selling candy bars like a lot of people do.”

Andrew Zack, a pre-med student, came to the event to support his friend.

“She’s doing it for a charity event for some sort of animal crusade, if you will, and I thought it would be fun to support her,” Zack said.

“There have always been a group of 10 to 20 people that find a little backroom that is in Dunkin Donuts,” Zack said. “We take over one of the two TVs in there, and someone will bring in either a Gamecube or Wii U. It is a fun way to get together with a couple of people and play with your friends.”

Zack has participated in one other tournament prior to this one.

“It was in Liberty, and I went and got absolutely crushed by all the people that were there,” Zack said. “It’s impressive how much people can invest in this game to become the absolute best that they can.”

“I love Super Smash Bros., and I’ve been playing it for a long time,” Cappelli said. “I was interested that YSU had an event going on, so I came down and checked it out.”