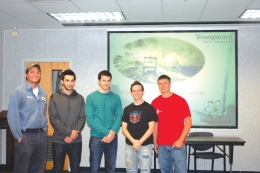 Six engineering students will compete for the national title in the Green Energy Challenge in Las Vegas on Saturday.

The students, members of the student National Electrical Contractors Association chapter at Youngstown State University, placed in the top four with their written proposal in April. Each of the four teams that advanced will give a 15-minute presentation on Saturday, followed by a 10-minute Q-and-A session.

ELECTRI International and NECA kicked off the first Green Energy Challenge in 2009.

This will be YSU’s third year participating in the competition, which takes place at the annual NECA conference. In 2011, the team placed second in San Diego, and in 2010, third in Boston.

“Students, they kind of have a competitive nature, and they enjoy this kind of thing,” said Ted Bosela, adviser of NECA and a professor of electrical engineering.

Kalen Wallace, Jarrett Scacchetti, Mike Currao, Jason Nutt, Ethan Parks and David Wright were the main contributors, and they will present the proposal.

Scacchetti, a senior electrical engineering major, has high hopes that the team, which has named itself Penguin Power, will win first place this year.

“I feel very confident this year that we will be able to achieve the success that we want,” Scacchetti said.

The competition required a 50-page proposal for energy conservation in a campus building.

The students chose to assess the Youngstown Historical Center of Industry and Labor. Scacchetti said it is the only older building on campus that hasn’t had a recent lighting upgrade, making it a prime target for reassessment.

“What’s most enjoyable about it is you’re taking the theory you learn in the classroom,” Wright said. “This is a practical application of that theory.”

Their proposal recommends upgrades to the building’s lighting and mechanical systems, as well as other upgrades throughout the building, including mounting two wind turbines on the roof.

The cost to implement the primary proposal is estimated at approximately $100,000, but with a yearly savings in energy costs of around $50,000.

The Mahoning Valley NECA chapter, along with the YSU Student Government Association and the national NECA organization, contributed funding to send the nine students who are attending the conference to Las Vegas.

Wright said the chapter spent a few hundred man-hours between 12 to 14 people working on this year’s project. During the YSU NECA chapter’s first year competing, four students participated in the competition.

“We had a real small student chapter, and it just kind of snowballed from there,” Wright said.

The YSU NECA chapter has been mostly consumed with the Green Energy Challenge since its inception, but members have also attended a code seminar and hosted an energy-saving ideas competition.

Members of Penguin Power, along with competing and attending conference seminars, hope to do some sightseeing while in Sin City.

“Vegas is Vegas,” Scacchetti said. “What better way to celebrate a potential victory than being in such a big area?”