During World War II the Los Alamos National Laboratory in New Mexico first opened under a secret name, Project Y. At the top-secret facility, the Manhattan Project was developed which culminated in the creation of “Fat Boy” and “Little Man,” the two atomic bombs dropped on Hiroshima and Nagasaki. 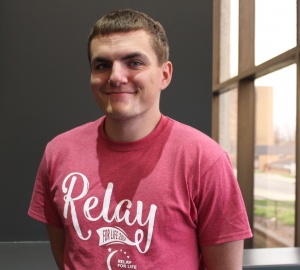 “Out of the internships I applied for, I was most excited to be accepted to this position because it is a prestigious government research laboratory,” Slavic said. “Los Alamos holds significant historical importance to the U.S. military.”

He said he attributes his passion for U.S. military history as to why the Los Alamos internship stood out to him among the rest.

According to Slavic, the internship focuses on cybersecurity topics including network archaeology, computer forensics, malware analysis and incident coordination. The early portion of the internship surrounds morning lectures, supplemented with afternoon projects.

He said as the internship progresses a small team of interns are selected to work on their project alongside a faculty advisor.

“As a part of these projects, interns are given access to real data from past cybersecurity incidents,” Slavic said.

The internship, which is from June 5 until August 10, focuses heavily on computer technology.

The advancements in technology including Wi-Fi and smartphones only furthered Slavic’s interest.

When Slavic was younger, he said working for the FBI became a dream of his.

“In high school and my freshman year of college, I wanted to join the FBI. After looking at their desired education for applicants, I decided that a major related to computer science would be the best route for me,” Slavic said. “I took my first computer programming class my sophomore year at YSU and immediately knew the field was for me.”

While Slavic said he no longer has the strong desire to join the FBI, his interest in computer science, especially cybersecurity, has stayed with him.

Throughout his time at YSU, Slavic has been recognized with multiple awards, as well as participating in several organizations on and off campus.

“As a recipient of the Leslie H. Cochran University Scholars Award and member of the YSU Honors College, my time at school has been centered on involvement on campus and in the community,” Slavic said.

Additionally, Slavic serves as a member of the academic senate, an historian of the YSU Rotoract, entertainment co-chair of YSU Relay for Life, a member of Gamma Theta Upsilon and a member of the Security and Police Advisory Committee.

He is currently a cadet in the Air Force Reserve Officer Training Corps.

After graduation, Slavic will be commissioned in the United States Air Force as a cyberspace operations officer. For six months he will attend technical school at the Kessler Air Force Base in Biloxi, Missouri.

Coskun Bayrak, chair of the YSU computer science and information systems department, spoke highly of Slavic and his upcoming internship.

“This is something we love to see at YSU,” Bayrak said. “Los Alamos is an elite research lab that deals with highly sensitive material. It is prestigious to get your foot in at. Not too many people are fortunate to get these opportunities.”

Bayrak said the department focuses on making sure each student is well equipped for their future career, whether it’s through internships, co-ops or formal training.

Additionally, Bayrak said students in the past landed internships with First Energy, the U.S. Air Force, Google and Yahoo.