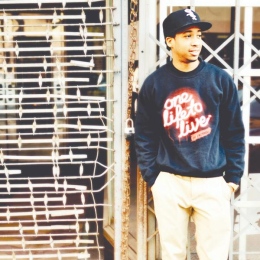 Keilyn Davis describes himself as essentially introverted — a man with unwavering faith. He is on a mission to embrace his own pursuit of happiness through music, expression and the art of honesty.

“I’m a very private person, and I have a tough time talking about my emotions, or even past stuff, just anything. I have a hard time expressing myself through just talking,” Davis said.

On stage, however, Davis shows his true colors.

“When I’m expressing myself on stage to music, I just let myself go,” Davis said.

Davis started his hip-hop career two years ago. He began with a clean slate, experimenting with basic recording to piece his songs together.

The young musician did not have experience recording music, but took the initiative to learn from people who are involved in the field.

Davis showcased his music on the Internet and got the attention of a Cleveland producer who passed his information on to a friend.

Michael Krieger became his representative through his western-based music industry, The Higher Plane. As their professional relationship grew, so did their friendship.

“It was really important to me that we continue to grow and connect on a personal level because we share the same Christian beliefs, and our values are the same,” Krieger said.

Those values, Krieger said, are precisely what he thinks will make Davis successful. He said it is hard to come by an artist that is so grounded at the beginning of his career.

Davis said his biggest inspiration is Kanye West because his first album was so relatable and down to earth.

Krieger said Davis incorporates the same morality into his music.

“A lot of times he goes into a song and really has a concept behind it. He’s always using his voice in every way he can. He’s really found his voice,” Krieger said.

Davis’ first album, “My Pursuit of Happyness,” was titled in honor of Will Smith’s 2006 film. While watching the film, Davis said he felt like he was going through the same tribulations as the main character.

“Pretty much to strive for my goals and my dreams, but it’s like everything is hindering you, and the whole world is sitting on you, but you have to persevere through that.”

Krieger said “My Pursuit of Happyness” is a strong album, and it has really helped Davis grow as an artist.

“In this project, he’s showing off more of his diversity. He doesn’t try to overwhelm people with his lyrics,” Krieger said. “There are songs that are a bit more universal; there are still some songs that are catchy and relatable to the listener.”

Davis said his album “Timing” is diverse, and that he is confident that people will enjoy it. He attributes his fame to his family, friends and God.

He said that, although he has been doing it for only a couple of years, he has accomplished an exponential amount.

“I feel like my faith has really taken me places that I could never imagine, and hopefully it will take me to even bigger places in the future,” Davis said.

Krieger said he started at the “ground floor” with Davis, and the sky is the limit for this “up-and-coming” artist. He added that he has high hopes for Davis to achieve greatness.

“My hope is make great music and to live comfortably. I was never in it for the fortune and the fame,” he said. “If that comes with it, then so be it, but I want to make good music first and foremost and be happy.”