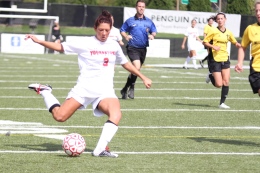 YSU forward Chelsey Haney takes a shot on the University of Wisconsin Milwaukee goal during the first half of Saturday’s matchup at Stambaugh Stadium. Haney finished the game with one goal helping the Penguins to a 2-1 victory over UWM. Photo by Dustin Livesay/The Jambar.

The Penguins applied pressure right from the kick off. Forward Chelsey Haney made an impression from the outset, bringing the ball in from the flanks and making Milwaukee’s keeper remain vigilant.

Within the first 15 minutes, Haney made three attempts at goal, one of which found the back of the net in the eighth minute, setting Milwaukee on the defense the rest of the game.

“It felt really good,” Haney said. “The goalie was coming out and I just hit it over the top of her.”

For much of the first half, YSU frustrated the visitors by stopping their breaks and halting their progression up the field. Milwaukee attempted several breakaway plays that resulted in a bottleneck of white shirts.

“We wanted to make sure we had pressure cover from all over the field and then bring the double team from the midfield to deny their service from the flanks,” Lemke said. “I think we did a pretty good job of that.”

YSU defender Shay Sade repeatedly forced Milwaukee’s defense to run back to follow lofted passes from the right flank into midfield. Perfectly placed balls were not picked up, though, and the forwards missed a couple of opportunities to put pressure on Milwaukee’s keeper.

“Our forwards are struggling (to run down) the defensive line,” said Lemke. “I think we could have given them a little more trouble. But we’re getting it.”

Following YSU forward Jade Flory’s underpowered and unsuccessful penalty attempt four minutes into the second half, YSU conceded some fouls but soon started connecting passes. Minutes later, Milwaukee were awarded a penalty kick for a late tackle, but YSU goalie Jackie Podolsky remained composed under pressure, making the save and keeping YSU ahead.

“Early on, we were hitting it right down the middle and we didn’t have any space to run on to,” said Lemke. “But we tried to change it at half time, and the players did a better job of it with the adjustment.” YSU’s Katie Hohmann missed the crossbar by inches in the fifty-first minute, shooting off a one-touch pass from teammate Jade Flory.

Milwaukee’s keeper hovered at the edge of the penalty box all afternoon. Flory worked hard, beating her markers and making some useful passes, and eventually, in the sixty-ninth minute, she chipped the keeper to chalk up YSU’s second goal.

YSU allowed Milwaukee a goal eighteen minutes before the final whistle, scored by Milwaukee’s Krissy Dorre. The game became tense at the finish, with YSU making long clearances to run down the clock and keep the score at 2-1.

This is YSU’s second win in a row, and the team celebrated at the end. Sade, who put so much pressure on Milwaukee’s defense at the start of the game, said that YSU are going to improve even more during the season.

“I think everybody did a great job, a brilliant job,” Sade said. “We’ve been working on it, and we’re a great team. We’re a young team, a new team. And we’ll do great this year, I promise you that.”