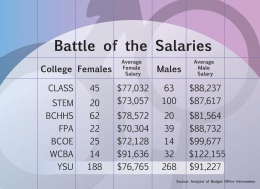 Salaries for faculty at Ohio’s other public universities are substantially higher than those at Youngstown State University, yet the gap is even greater for women at YSU.

According to analysis of data provided by the budget office, male full-time educators earned $15,400 more on average than female educators in fiscal year 2011. Average male salary with summer pay at YSU is $92,227, whereas females earn $76,765.

The Office of Institutional Research and Policy Analysis calculated an $11,000 difference between men’s and women’s base salaries over the past 10 years.

The disparity led YSU’s chapter of the Ohio Education Association to file a grievance in the fall of 2010. The university was involved in two similar matters in the 1990s and another, which was settled in 2008, when it paid $675,000 to Sandra Denman, then general counsel.

In 2004, a colleague informed Melissa Smith, a foreign language professor and a member of the women’s studies department, that she was underpaid. She received a $1,000 boost.

Both parties agreed to the latest settlement in July. The terms grant increases of $2,500 to nine female faculty members’ salaries and commission a joint committee that will examine any reasons for the disparity.

In fall 2010, the faculty union demonstrated that two female professors, Suzanne Leson and Jeanine Mincher, were earning less money than two of their male colleagues, even though the women had more experience in their respective fields.

Ikram Khawaja, YSU provost and vice president for academic affairs, said the discrepancy was due to the language of the collective bargaining agreement.

The contract from 2005 to 2008 automatically gave tenure-track faculty members a raise upon completion of a post-doctorate degree. The women completed their degrees after a new contract removed the automatic provision from the raises.

“Article 4.4 of the 2005 to 2008 agreement was eliminated, and no substitute was referenced in the 2008 to 2011 agreement,” Khawaja said. “The original decision was fully supported by the contract and was not discriminatory.”

Khawaja agreed to a smaller pay raise when the arbitrator recommended a settlement in order to save court costs and prevent a “negative atmosphere or experience that remains once the case is concluded.”

“We are accepting [Khawaja’s] explanation that his decision in that case was not based on gender discrimination … but we didn’t accept that there isn’t discrimination on campus,” said Julia Gergits, YSU-OEA president, English professor and coordinator of general education.

Gergits said there is an institutional problem at the university but couldn’t say if the discrimination is intentional. She said the administration has offered several reasons for the disparity, but the union wants the committee to take a deeper look at the issue.

“When you have 15 or 20 different that’s-why-it-happens-here’s, then you start getting into a statistical problem,” Gergits said.

Martin Abraham, founding dean of the College of Science, Technology, Engineering and Mathematics, said, to some extent, that the discrepancy could be attributed to longevity, seniority and proliferation of one gender in a specific department, which earns higher salaries.

However, Gergits said those variables had been factored out in the data presented at the time of the grievance, and the gap was still subject for concern.

She has confidence in the committee — calling it “a good balance” — but said the task will be difficult. Several factors affect starting salaries and promotions, and the standards are unique to each academic department.

Each department chair recommends a base salary for new faculty. The figure goes to the college dean who gives input to the provost’s office. Khawaja said deans and department chairs make their recommendations based on the “market value” of professionals in their field working in the private sector.

And the private sector reflects the gender and salary disparity at YSU.

For 2009, the U.S. Bureau of Labor Statistics reported that male professionals dominated high-paying private sector careers in the computer and engineering industries. Professional women in the private sector earned their highest average in the fields of business and management, but were more likely to work in health care occupations that paid less.

Of the 44 million female workers, their median earnings were 80.2 percent of male median weekly earnings. Women in the education field make even less, at 77 percent.

Faculty salaries at YSU reflect the national trend. Female professors out-earned and out-numbered males in the Bitonte College of Health and Human Services, where the average educator’s base salary was about $3,000 less than the university average. However, after summer pay was included for fiscal year 2011, the salary gap swings in favor of males: about $6,000 for professors.

Every other college employed more male professors and at a higher average salary than females. In STEM, only four of 46 professors were female, and only one is in the engineering department, which yields the highest average salaries.

The Williamson College of Business Administration held the highest average salary for men and women. However, salaries were nominally different between sexes, but only four of 18 professors were female.

Including summer pay for fiscal year 2011 widens the gap.

Smith said the gap stems from a sociological level.

“Girls are supposed to be nice, and being nice gets you more collegiality, but it doesn’t get you more money. A woman that presses for a higher salary is a b—-, basically,” Smith said, regarding how aggressive women are perceived today.

Smith said women in the workforce are subject to, perhaps inadvertently, discrimination due to men typically being the primary breadwinner.

“I don’t want to pretend this is just the same as it was in the old days; it’s not,” Gergits said. “But it’s still there, and it’s quiet. It’s hard to get at because it’s not obvious.”