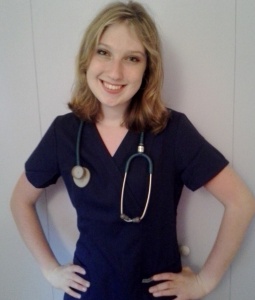 Karissa Kuneli, a senior in the respiratory care program at Youngstown State University, will travel to Tampa in November to receive the William W. Burgin Jr., M.D. and Robert M. Lawrence, M.D. Education Recognition Award from the American Respiratory Care Foundation and the National Board for Respiratory Care.

Kuneli submitted a literature review about respiratory care along with a paper about why she deserves the scholarship, but she never expected to be the chosen recipient from a slate of candidates nationwide.

She said she just wanted to see if anything would come out of it.

“I didn’t even know the position of respiratory therapy existed until my senior year of high school. I wanted to go into the medical field, but I didn’t want to be a nurse or a doctor, and I found out that YSU had a well-known respiratory program, so I thought why not give it a try? And it ended up being exactly what I was supposed to do,” Kuneli said.

Kuneli plans on using the cash award to pay for her undergraduate degree since she intends to wait a couple years before pursuing her master’s degree. She said she wants to get a job at St. Elizabeth Health Center.

Joe Mistovich, chair of the department of health professions, said Kuneli is an exceptional student.

He said she had to submit a paper she did on the cause of cystic fibrosis to receive the award, which makes her achievement even more prestigious.

“They only administer the award to one student a year in an undergraduate program … and there are around 400 respiratory care programs in the country,” Mistovich said. “It is prestigious simply because it is a very selective award.”

Kuneli grew up in Hubbard and was home schooled. She had her first classroom experience when she came to YSU.

“It was a big shock just seeing the schedule because I was used to working at my own pace and getting done as soon as I wanted to, and having that schedule with due dates and having someone teach me, that was all a new experience,” Kuneli said.

She said home schooling taught her to study on her own, and that helped her at YSU.

“As a homeschooler, I was able to figure out what ways I learn the best,” Kuneli said. “I was able to teach myself in those ways, and so I was definitely able to carry over those skills once I got to college.”