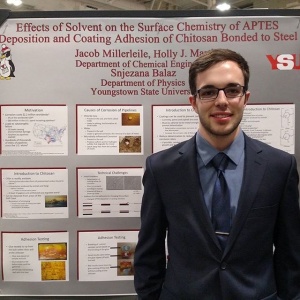 “It’s typically more aimed at mechanical engineering,” Martin said. “But they have a lot of coatings and other research areas where chemical fits in quite well.”

YSU student Jacob Millerleile presented research aimed at bonding chitosan, or shrimp shell, to steel in order to protect the steel from corroding when exposed to salt.

“If you think about what chitosan does, it protects shrimp from the salt water,” Millerleile said. “So we are trying to protect the steel from the salt in the air.”

Millerleile worked alongside Steven Cornich, who was conducting similar research. Millerleile said the technique could be used to extend the life of infrastructure like pipelines and bridges. He intends to continue the research if he attends graduate school.

A professor from Japan showed interest in the product and provided Millerleile with some advice.

“He gave me a lot of feedback about using a different solvent, one that I used but didn’t have the same results as him, so I am going to try to take that and apply that,” Millerleile said. “[There was a] lot of interest in what we were doing.”

Martin said the researchers at the conference came from a variety of backgrounds, including university professors and industry researchers.

“Typically it’s the professors who do research at the universities who bring students to present,” Martin said. “The researchers at international labs and industries present themselves.”

Most of the students presented at poster sessions where they were free to talk back and forth with attendees. Others gave oral presentations and took questions afterwards.

Jacob Miller, a graduate student, researched the differences between traditionally manufactured stainless steel and 3-D printed stainless steel from America Makes. He corroded them in a sulfuric bath to see how they changed.

Katherine Shields also researched bonding chitosan to metal, but she used titanium with an eye towards medical applications involving implants.

“There were several of us doing a project similar to this,” Johnson said.

Martin supervised the research projects, but encouraged them to move independently.

“They come up and discuss it, but I let them come up with the ideas,” Martin said. “The whole idea of that is I don’t want research to get directions; I want it to be research.”

Martin said the event allows them to interact with students and faculty from other universities in a relaxed setting. Last year, a professor approached a YSU student who ended up studying in South Dakota over the summer as a result of the interaction.

Johnson said the conference was informative and exposed the students to interesting research conducted at other schools. He said presenting his own research allowed him to become more familiar with it as well. He said he is always open to suggestions that could improve his research further.

“I would like to continue looking more into it,” Johnson said. “I think TMS is a fabulous idea. We should have more researchers from YSU on board to attend TMS because going to conferences really makes the school look good. We get our name out there, and we get recognized.”