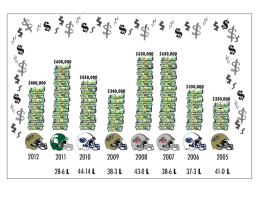 No matter the outcome of the University of Pittsburgh game on Saturday, Youngstown State University stands to make a significant gain.

The Penguins will receive $400,000 from Pitt just for participating. Since Division I-AA YSU began playing Division I Football Bowl Subdivision schools in 2005, the results have been underwhelming.

And while Ron Strollo, executive director of athletics, denied that the FBS matchups are strictly about money — which goes toward funding scholarships — he did admit that it plays a role.

“And, obviously, it also helps financially with the game guarantees.” However, from a competitive standpoint, the “money games” have been a disaster. In the seven games combined, the Penguins have recorded only two touchdowns. They have failed to top 10 points in six of the seven games. Even worse, YSU has allowed an average of 38 points per game. Yet the uncompetitive play has not discouraged the YSU football program, Strollo said.

“I think some people don’t like it, and some people have concerns,” said head football coach Eric Wolford. “But I embrace it, and I love the opportunity.”

YSU will continue to receive the opportunity to pull off an upset — and earn a paycheck. Strollo said the football program is in negotiations to continue playing FBS teams “as far out as 2015 and 2016.”

As for Saturday’s opener at Heinz Field, the Penguins know they’re not expected to win. But they also know that they enter 2012 with their strongest roster in recent years, while the Panthers are in the midst of change. “We’re a significantly different football team,” Wolford said of his roster. “Now, I think we can legitimately expect to go there and compete at a high level.”

“I used to watch Coach Chryst film even when [Illinois] wasn’t playing Wisconsin,” Wolford said. “I expect him to do what they did at Wisconsin.” Factors like an upgraded roster and Wolford’s familiarity with Chryst have created a quiet confidence among the Penguins.

“We can kind of put together a puzzle of what [Pitt] may show to us,” said quarterback Kurt Hess. “If we take care of what we can control and go out there and execute, maybe some things will fall our way and we’ll be able to get a win.”