The Penguins will open their season at the University Of Akron against KSU. This is the third Annual Northeast Ohio Coaches vs. Cancer doubleheader.

“When you think of Kent State the first thing to come to mind is toughness. This program is a good rebounding team; they have some star power in Jaylin Walker,” Calhoun said.

Calhoun stressed rebounding as one of the defining factors in the upcoming game, saying it will take all five guys to keep them off the glass.

“It’s interesting to see how we matchup against them because we’re kind of undersized as far as our starting five and have [big men] that can rebound,” forward Braun Hartfield said.

Hartfield has never competed against KSU so his only measuring stick has been what he’s observed via watching their games.

“I actually watched their game versus UCLA and they competed well, they got it down to seven with 10 minutes to go. They shared and they attacked the glass so it’s gonna be a tough task,” said Hartfield.

KSU fought hard in that game managing to put up a solid fight against last year’s title contender UCLA. 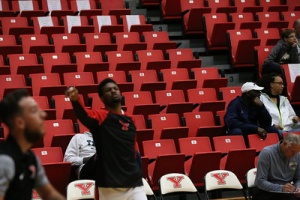 Last time YSU played KSU was its 2015-16 season opener. In those days, starting shooting guard Cameron Morse was coming off the bench. Former center Bobby Hain led YSU with 20 points as it lost 79-70 in a close contest.

With the closeness of both teams in location, the potential to make this game a rivalry is one that is enticing to the entire team.

YSU has seven players from the Northeast Ohio area. Hartfield and Francisco Santiago are both from Cleveland while John Kirincic is from University Heights near Cleveland. Naz Bohannon from Lorain, Justin Bofenkamp from Vienna, Ryan Strollo from Youngstown and Dan Ritter from North Lima all represent what Calhoun wants.

Calhoun expressed his excitement about the Coaches vs. Cancer Classic calling himself a “huge advocate” of the annual tourney.

Calhoun believes that it can help in the recruiting process, saying that it gives bragging rights to the team that wins.

“This is an opportunity for us to play the MAC’s [ Mid-American Conference] best team,” Calhoun said. “They won that conference tournament last year and went on a good run so it’s gonna be a pretty good barometer for us in the early part of the schedule.”

The University of Akron will host the Nov. 11 event. Akron will faceCleveland State University at 7 p.m. YSU suiting up to play in the finale at 9 p.m. against KSU.