The Youngstown State University Ethics Bowl team placed second at the national level for the second consecutive year at the Intercollegiate Ethics Bowl in Dallas on Feb. 26. 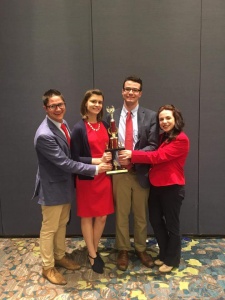 The Intercollegiate Ethics Bowl is a competition in which teams examine cases on current controversial issues and take a stance on those issues. Jacob Schriner-Briggs, a senior on the team, said the Society of Practical and Professional Ethics sends a packet of cases to contestants prior to the tournament.

“You don’t know what that question is, but you know based on the facts there are implied moral questions,” Schriner-Briggs said. “You study the cases, you talk about the potential angles you can take and then you go into the tournament.”

The opposing team critiques the first group’s argument before switching roles with a new case. A panel of judges asks questions regarding the cases and determines the winner of each round.

The team members were Schriner-Briggs, Tyler Miller-Gordon, Lindsay Heldreth and Rachael Jenkins. The team remained undefeated through preliminary rounds, only losing to a team from the United States Military Academy at West Point in the finals.

The team competed last year in Virginia, where a team from Whitworth University placed first. This year, YSU beat Whitworth in the quarterfinal of this year’s competition. Schriner-Briggs said this was a victory within itself for the team.

“We went into that round knowing that there was potential that our tournament would end right there and we were able to pull it off,” Schriner-Briggs said.

YSU harnessed what they learned from last years’ experience to improve their performance this year, Schriner-Briggs said.

To prepare for nationals, Miller-Gordon said the team held mock rounds with professors and teams from the regional competition to help master the packet of cases. He said involvement in Ethics Bowl encourages civil discussion amongst young people.

“That’s something that’s a hot topic right now in our politics and in our everyday lives as we’re interacting, especially on a college campus,” Miller-Gordon said. “The ability to discuss really controversial moral issues and really try to come to solutions that are best for everyone… is a skill that I gained through this.”

Alam Tomhave, the YSU chair of Philosophy and Religious Studies, is the coach for the YSU Ethics Bowl team. Schriner-Briggs said Tomhave has done a great job preparing them for competitions.

“He’s very good at ensuring that faculty from across the university participate in the program to give us variety of perspectives to help shape our arguments and create multi-dimensional approaches to the things we’re discussing,” Schriner-Briggs said.

The Ethics Bowl teaches students skills that everyone needs to have in their lives, Schriner-Briggs said.

“Regardless of what you want to do after you graduate, being able to break down arguments, think about things critically and being able to communicate with others in a persuasive and effective way is a universal benefit,” Schriner-Briggs said.

“You’re always approaching [the cases] from a multi-dimensional perspective and even once you formulate a position, you are pressed to challenge that position and try to tear it apart,” Heldreth said. “That way, it can be stronger when you go up against very good teams and go up against the judging panel.”

The Ethics Bowl program came to YSU two years ago. Not only does the team’s success bring recognition to the university, it also acknowledges the Religious Studies and Philosophy department on campus, Miller-Gordon said.

“[The department] is undervalued. I think it brings a great positive image,” Miller-Gordon said. “It really puts YSU on the map in the philosophical and ethical realm.”