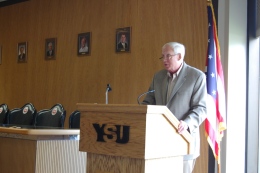 Tom Shipka, the YSU-OEA’s founder, delivers the history of the union to commemorate its 40th anniversary. Photo by Marissa McIntyre/ The Jambar.

As the Youngstown State University chapter of the Ohio Education Association turns 40, the current union president and two past presidents spoke on Thursday in Tod Hall.

Tom Shipka, founder of YSU-OEA, came to YSU in 1969 to take a position in philosophy. By late 1971, he would find himself chairing a committee to unionize the faculty.

“My last intention when I arrived was to get involved with organizing a union,” Shipka said.

He recalled the early days of organizing the union when members were worried about what was going to happen next — and, as a result, would meet at his house on Sundays to discuss collective bargaining.

Throughout the last 40 years, YSU-OEA has gone on strike twice.

The first strike fought for pay raises and better health care. Under current YSU-OEA President Julia Gergits, the fight continued with a weeklong strike in 2005 and turbulent contract negotiations in the fall.

Russo dealt with YSU faculty being the lowest paid in the state, as well as working to raise the bar for faculty by suggesting the hiring of more full-time faculty.

“It’s always stressful to be an untenured faculty member,” Gergits said about union members’ fear of being laid off.

In the 2000s, conditions were either OK or “really bad,” she said. Stability was another challenge she’s faced, as the union came close to striking again in 2011.

Tom Maraffa, professor of geography at YSU, is a part of the negotiating team for YSU-OEA. His involvement with negotiations in the past has been different, as he’s represented both administration and faculty.

“In the most recent negotiations, I represented faculty,” Maraffa said. “Regardless of which team I’ve been on, I view my role as trying to access the best outcome for each side and the university as a whole.”

Maraffa came to YSU in 1985 and worked various administrative positions from 1992 to 2010.

Maraffa said although the stress of negotiations can result in undesirable behavior, there hasn’t been a negotiation that hasn’t ended in an agreement.

YSU-OEA has also worked to help teachers manage time between teaching in the classroom and leaving time for research.

“We fight for conditions a lot,” Gergits said.

She said making the classrooms more 21st-century friendly will improve the teaching environment as well as students’ ability to retain information.

Looking into the future of the union, Gergits said she would like to see younger faculty members get involved.

“We have a lot to get ready for in the next negotiations,” Gergits said.

Raising wages for junior faculty members, an issue Gergits said she foresees in the 2014 contract negotiations, was a focal point for Russo’s presidency as well.

“Our problem was convincing the senior faculty members that this is what we had to do. Otherwise, they will be permanently behind,” Russo said.

YSU-OEA will welcome guest speaker Sheldon Gelman on Friday at 3 p.m. in Tod Hall to speak about the role of Ohio universities’ presidents in shaping Senate Bill 5.

Gelman’s article, “Adopting Ohio Senate Bill 5: The Role of the Public University Presidents,” was published in the Albany Law Review in March.

“Like a lot of Ohio faculty members, I was surprised that a lot of university presidents sided with Senate Bill 5,” Gelman said.

He said he decided to write the article because he was offended, and felt it to be deeply wrong that university presidents may have kept their views a secret.