Kevin Yarabinec, Youngstown State University graduate and Penguin baseball pitcher, passed away at the age of 24 in a car crash in Clarion County on Sunday evening.

He graduated from Sharpsville High School in 2012 and helped YSU win the Horizon League Championship in 2014.
A statement by the YSU Athletics Department said, “The Youngstown State baseball family is heartbroken about the loss of one its recent student-athletes, Kevin Yarabinec, who passed away Sunday evening. Yarabinec was a right-handed pitcher with the program from 2014-17 and graduated in May 2017 with a bachelor’s degree in criminal justice.” 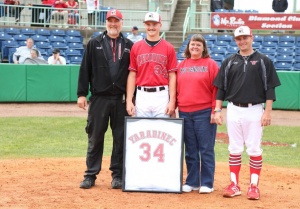 A statement released from YSU head coach Dan Bertolini said, “Kevin was not only a great player, but he was an even better teammate and friend. His smile and energy were infectious. He lit up our clubhouse every day, and we will carry fond memories of him the rest of our lives. Our entire team extends our deepest condolences to his family. He will be sorely missed.”

Bertolini also tweeted, “This has been so challenging for me to write. Kevin, I can’t believe you’re gone. I can remember recruiting you at Sharpsville and four years later I had the pleasure of coaching you. Your smile and energy will be greatly missed RIP#34.”

Yarabinec was voted to the Horizon League All-Freshman Team in 2014. As a junior, he became the sixth player to lead YSU in both wins and saves in the same year. He finished his Penguins career ranking sixth in school history with eight career saves, and his 61 career appearances ranked 17th, according to the athletics department.

Yarabinec was riding in a pick-up truck with two other men when the vehicle hit a tree. All three were sent to a hospital near Pittsburgh. Both Yarabinec and Mark Marucci from West Middlesex, age 29, passed away from their injuries.