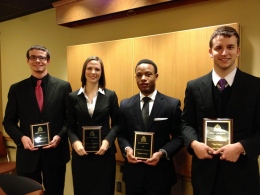 On Friday and Saturday, eight Youngstown State University students went head-to-head against some of the nation’s most prestigious educational institutions and brought home several honors.

In October, 285 teams of 570 students from across the country competed in regional tournaments. The best 80 teams made it to nationals in Virginia Beach, Va., including four of YSU’s six teams.

In addition to the individual honors, White and his partner Josh Prest reached the “sweet 16,” as the team’s coach, Ron Slipski, called it. Catie Carney and James Toliver reached the “awesome eight.”

“I believe that, intellectually, they are amongst the best young people in the nation, and they worked their tails off. They wanted it. They went to work, and they didn’t let up until it was done,” Slipski said.

Though other schools may have had more resources at their disposal, he said, YSU’s success came from something more valuable.

“I like to call this the Work Belt rather than the Rust Belt,” he said. “All of us in this community have a tendency to think that the rest of the world somehow is better than we are. They’re not.”

The YSU students began preparing in the summer, studying case law and practicing their arguments. During the fall semester, they met three times a week for three credit hours, but, as the competition drew near, they stepped up their game.

“I spent at least 10 hours a week preparing from May-January,” White said in an email. “My teammates put in just as much work as I have, and I consider it a team accomplishment.”

To prepare the team even further, Slipski arranged for his students to practice at the 7th District Court of Appeals in downtown Youngstown.

“It was very real from the beginning,” Carney said. “It’s probably the closest real life experience you’ll get to being a lawyer.”

She said the YSU students were well prepared for the tournament, even though they didn’t expect to perform as well as they did.

Carney said word of their success spread fast throughout the tournament, and YSU won some prestige along with the awards.

“People started talking about Youngstown. They know we compete. They take us seriously,” she said.

Slipski extended the honor to all who would dare take the hands they are dealt and turn them into success.

“YSU students can accomplish anything,” he said. “All you have to do is put your nose to the grindstone.”