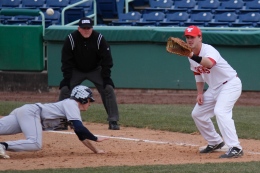 YSU first baseman Marcus Heath attempts to catch the ball to tag out the University of Akron’s Joey Haverlak during Wednesday night’s matchup at Eastwood Field in Niles. Photo by Dustin Livesay/The Jambar.

It was an opportunity for the Youngstown State University baseball team to get its home season off to a perfect start. But just like the Penguins’ base runners in the final two innings, that opportunity was stranded.

The Penguins (7-20) left the tying run on third base in the eighth and ninth innings, as they fell to the University of Akron, 5-4, Wednesday afternoon at Eastwood Field in their home opener.

“It was definitely a game that we had opportunities and had we executed a little better, the score could have easily flipped in our favor,” said YSU’s head coach Steve Gillispie.

Trailing 5-4, Drew Dosch led off the eighth inning with a walk. He reached third base with one out after a couple of wild pitches by Akron Zips pitcher Samuel Trecaso.

But then Trecaso settled in. He caught Phil Lipari looking at the third strike for the second out. The senior pitcher then got David Saluga to strike out swinging, ending the YSU threat.

As for the ninth inning, Josh White singled with one out. He reached third with two outs on a single by Mike Accardi. However, a groundout by Neil Schroth stranded White and ended the game.

“It’s tough, especially how we fought back after the fifth inning and played really well,” Accardi said. “It’s just a tough break that we didn’t get the hits when we needed, especially in the ninth inning.”

Akron (5-21) stuck first, as Zips left fielder Jared Turocy launched a two-run homerun to right field in the top of the second inning. Akron got to YSU starting pitcher Pat Shedlock again in the third inning when a double by Matt LaRocca scored another run.

The YSU bullpen performance was a different story. Harless, Erik Okleson, Patrick O’Brien and Nic Manuppelli allowed only one run in seven innings of work.

“We pitched well,” Gillispie said. “Last night at Ohio State, we pitched well. Maybe not as good of a job on the front end of the game today, but I’ve been real pleased with that.”

A Salem RBI single stretched the Akron lead to 5-2 in the sixth inning, before the Penguins responded in the seventh.

YSU opened the inning with consecutive singles by pinch hitters Nick DiNello and Josh White. Shirley then singled for his second RBI of the game. Another single by Accardi brought home White and cut the deficit to 5-4.

“After the fifth we turned it around,” Accardi said. “We strung some hits together and our pitching staff really held us in there.”

Still, Gillispie couldn’t help but notice the missed opportunities throughout.

“We had a couple opportunities early on that we didn’t take advantage of,” he said. “But you have to tip your cap to them.”

YSU will open a three game series against the University of Wisconsin-Milwaukee at home on Thursday at 3 p.m.

“It’s always tough when you lose, no matter who you lose to,” Accardi said. “But we’re still all focused on what’s at hand.”