After Kent State University spoiled the debut of head coach Jerrod Calhoun and the Youngstown State University Men’s Basketball, they look to recover against the University of Franciscan on Tuesday and Canisius College on Saturday.

Against the Golden Flashes this past Saturday, YSU managed to stay within reach to begin the game trading leads before KSU ultimately went on a 7-0 scoring run to bring the score to 47-41 at the half.

“We had a lot of guys play really, really well the first 20 minutes. I thought from a game plan standpoint, our kids really executed. I thought they had energy and we kept Kent really off balance,” Calhoun said.

KSU came out swinging in the second half going on a 10-0 run to make the game 56 to 43. From there, it didn’t look back with the Penguins poor shooting effort only accounting for 38 percent from the field to the Golden Flashes 68 percent to finish out the game. 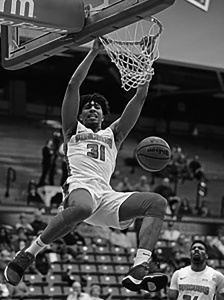 The high percentage shooting KSU proved too much as it went on to hand YSU a 111-78 blowout win. Guards Cameron Morse and Braun Hartfield scored 19 and 14 points respectively but they collectively only went 12-of-42 from the field.

Calhoun in last week’s press conference emphasized the importance of rebounding against this tough KSU team and actively working to keep them off the glass. Something the Penguins did not seem to manage as the Golden Flashes grabbed 57 rebounds to YSU’s 41.

YSU faced some injury woes early on when point guard Jeremiah Ferguson went down early with a broken nose. Ferguson was starting in place of guard Francisco Santiago who is still on minutes restriction due to a knee injury.

Not all was bad as freshman forward Naz Bohannon put up solid numbers with nine points and eight rebounds. Though he’d disagree saying he could have done more to help the team win and promising that the team won’t get outworked again.

“It’s about how you bounce back, adversity is facing us right now. We got punched in the mouth and this is going to show our true character,” Bohannon said.

YSU surely will be coming into their next two match-ups with a chip on their shoulder.

“You live and you learn, it’s game one,” Calhoun said. “I said all along we were gonna find out where our level of toughness was, I think we have to get tougher when the ball doesn’t go in the basket but we have a lot of other opportunities.”

After an absolute beat down of Division III Franciscan by a 134-46 score, YSU looks ahead to a tough Canisius College squad which has beaten the Penguins before. YSU broke a school record for points (134) and point differential (88).

“These people are paying money to come watch you play basketball, you have to take great pride in that,” Calhoun said.

The Golden Griffins have started the year 0-2 and will be a tough road match-up for YSU to handle.

That game will be the first true road game on the year for YSU.

Tip off against Canisius game will be Nov. 18 at 7 p.m. in Koessler Athletic Center. The game will also be broadcasted on ESPN3.