Youngstown State University is a plaintiff in a lawsuit filed by Ohio Attorney General Mike DeWine that challenges the constitutionality of a certain provision in the Affordable Care Act, commonly known as Obamacare.

Section 1341 of the Affordable Care Act requires states to establish reinsurance entities during the first three years of the law’s implementation, intended to stabilize premiums and reduce the risk posed to insurance companies as they adapt to the regulations introduced by Obamacare. If a state chooses not to establish reinsurance — as Ohio did not — they will be established by the federal government.

The law specifically cites the risk of adverse selection. This occurs when insurance companies attract only high-risk individuals who are expensive to insure. The individual mandate exists to protect against this, and the reinsurance pools provide a second layer of protection during the transition period.

The reinsurance entities are funded by what the legislation refers to as a payment — but DeWine has labeled a tax — to be made by “health insurance issuers and third party administrators on behalf of group health plans.”

The United States Department of Health and Human Services has used this language to collect payments not only from private insurers, but also state and local government entities, like YSU, whose employees receive coverage through self-insured group health plans.

DeWine sees this as an abuse of executive power.

“This tax assessment by the Obama Administration is an unprecedented attempt to destroy the balance of authority between the federal government and the states,” DeWine said in a press release. “The $5.3 million Ohio is being taxed is money that could be used for education, public safety and roads and bridges. The states are not the federal government’s tax collectors, and the Obama Administration should refund these illegal taxes immediately.”

The lawsuit claims that it is unconstitutional for the federal government to collect what it refers to as a tax from the states, citing the 10th Amendment, which states that powers not delegated to the United States by the constitution are reserved for the states. Furthermore, the lawsuit argues that state and local government institutions were not intended to be considered “health insurance issuers, and third party administrators on behalf of group health plans,” and their inclusion by the Department of Health and Human Services is evidence of bureaucratic overreach.

Jonathan Adler, a professor of law at Case Western Reserve University, said that while the state argues there is a doctrine of intergovernmental tax immunity, the second argument is the one that has the greater force. 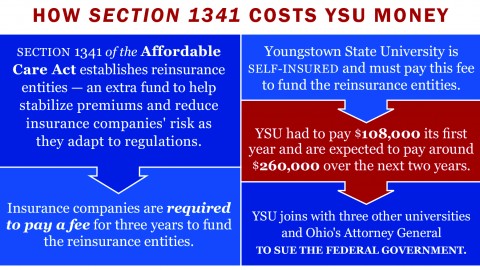 “When the federal government is implementing a policy in a way that appears to alter the federal-state balance or to intrude upon the ability of state governments or governmental entities to perform their normal functions, there’s a very heavy presumption against a statutory interpretation that would authorize that result,” Adler said. “So that argument essentially is that unless the statute is absolutely clear about authorizing or even requiring the imposition of these sorts of taxes on state and local governments, that they’re not authorized. And I think that that argument is a very serious argument, and one that the federal government will take seriously and their courts will take seriously.”

The lawsuit aims to recoup the payments plaintiffs have already made and stop the government from collecting payments over the next two years.

Ron Cole, director of university communications at YSU, said the university had to pay $108,000 in the first year — $63 per person covered by the group health plan — and is projected to pay around $130,000 in each of the following two years, resulting in payments totaling nearly $400,000.

“We felt, given the cost, that it was worthwhile to us to sign on with the Attorney General to see if this is an applicable law and let the courts decide,” Cole said.