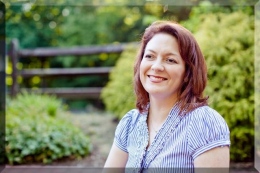 Colleen Clayton, an English instructor at Youngstown State University, takes on some serious topics in her new book, “What Happens Next.”

Clayton’s young adult novel tells the story of a teenager, Cassidy “Sid” Murphy, who feels like she really doesn’t fit in because of her body image. She then goes on a school ski trip and meets a guy who, at the time, she thinks is the best fit for her.

“She really never had a boyfriend before,” Clayton said. “She goes on a ski trip with her class, and she then ends up meeting someone who is a little older than her. She goes off thinking he is a good guy, but he is not.”

The novel is about a boy who takes advantage of Sid, and she has to deal with what happened to her in the aftermath of an incident. She then develops an eating disorder due to the trauma she endured.

“It’s about her finding her way through the trauma and coming out the other side of that,” Clayton said.

Clayton also discussed how she feels about drug-induced rape, the topic that inspired her to write her novel.

“I know people that this has happened to, and it is very real,” Clayton said.

She said she researched the connection between sexual assault and body image issues.

“There were a lot of studies out there that show that those things can be connected,” Clayton said.

According to “Eating Disorders and Sexual Assaults,” a study done by Columbia University in the City of New York, “Almost 30 percent of women suffering from bulimia were raped at some point in their lives.” In addition, “Girls who are sexually abused appear to be at a double risk for eating disorders.”

Aside from the seriousness of the topics discussed in the book, Clayton said she is excited for her upcoming release.

“It comes out Oct. 9, and [I’m] very excited about it,” Colleen said. “This is my first published work. The process has been five years in the making.”

Clayton said the process was long, ugly and brutal.

“Finally, it came across the desk of a bright, talented agent who saw something in my story that no one else did,” she said.

Clayton worked with troubled teens as a social worker before she even had a thought about writing.

“It didn’t occur to me that I could be a writer until my mid-30s,” Clayton said.

“I’d say I’m more surprised than anything,” Clayton said. “I never expected my life to take the turns that it has. I’m trying to treasure every moment.”

A reading and book signing is scheduled for 6 to 8 p.m. Oct. 11 at the McDonough Museum of Art; the event is open to the public.