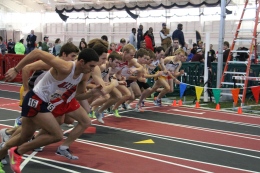 Runners from the Horizon League competed in the conference championship on Saturday and Sunday at the WATTS. The YSU men finished third overall, while the women placed second. Photo by Dustin Livesay/The Jambar.

What started out as a track meet turned into a dance party, as members from different teams in the Horizon League got their groove on at the end of the indoor championships.

The Penguins hosted the meet at the Watson and Tressel Training Site over the weekend. They performed well, with the women finishing second and the men placing third, only five points short of second.

“Overall, we had some tremendous performances,” Gorby said. “To host something like this, a lot of great kids stepped up big. One thing we didn’t have against Milwaukee was the depth.”

Senior Kaitlyn Griffith, the female field event MVP, won the weight throw and the shot put. Both of her distances were personal records.

“That was a good little birthday present,” Griffith said, referring to breaking the weight throw record on her 22nd birthday. “In shot put, it was still a personal record, but it wasn’t as big as I wanted it to be. But I did capture the school record.”

Junior Samantha Hamilton was also a standout performer for the women. She finished second in both the 5K race on Saturday and the 3K race on Sunday, setting personal records in both.

Hamilton said she thought she was going to be able to catch Butler University junior Katie Clark in front of her, but came up just a little bit short.

“She had a little bit more than I thought,” Hamilton said. “But when she separated and I went, I was like, ‘Oh, boy. This is either going to be the best decision that I have made or the worst.’ Thankfully, it turned out.”

Hamilton lost to Clark, who is ranked nationally. Gorby said Hamilton’s performance would go down in YSU history.

Hamilton took the previous meet off, something she said really helped her performance.

“I really had two great workouts leading up to this, which I think came from not racing,” Hamilton said. “I definitely think that was a very wise decision not to race last weekend. And they weren’t so much of fast workouts, but confidence workouts.”

For the men, junior Michael Davis was able to avenge his second place in the 60-meter dash from last year to come back and win it this year. He said it was a relief to be able to take home the title.

“Last year, I swore I won, but he caught me at the last second,” Davis said. “This is only the second time I have won something. Last year, I won the 200-meter outdoor. This is my first victory indoor, and it wasn’t my fastest time, but it was only a hundredth slower.”

Davis worked so hard in the 4×400 relay that he collapsed as soon as he crossed the finish line.

“Davis was huge,” Gorby said. “The 4×4 at the end, that is not usually his event. When you have local kids like him and Hamilton running at this level, it is a credit to the coaches and them.”

Since the Penguins hosted the tournament, they were able to relax a bit and avoid traveling.

“It was amazing, especially with the atmosphere, being able to have family and friends come and stuff,” Griffith said. “Usually, it is out past Indiana, and to have them have to drive out there that far is hard.”

Griffith said that before the WATTS, throwers had to do some improvising in order to practice. They would have to place wrestling mats and plywood in Stambaugh Stadium. Now, they have the advantage of practicing where they compete.

“To be able sleep in your own bed, that’s nice,” Davis said. “That’s probably the best part. It only takes me about a half hour to get here. You get to relax and go home immediately when it is over.”

Gorby said it was a lot of work to get everything in order, but it was well worth it.

“From everyone to the officials, to Ron Strollo, to Tim Stuart, it was just a great production,” Gorby said. “We try to give the kids a great experience and make it entertaining. From a team standpoint, we want to make that next step and win it.”