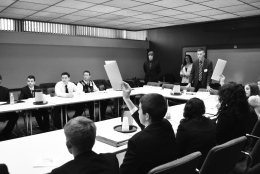 Sean Knaub leads a discussion on Syria in the crisis council during the 24th annual High School Model United Nations Conference at YSU on Friday. Photo by Kevin Alquist/The Jambar.

During the event, hosted by YSU’s Model UN team, students likened themselves to UN ambassadors and debated over simulated international issues.

Cory Okular, secretary general of the event, said Model UN exposes the participants to YSU and helps them develop organizational and social skills, while also challenging their political knowledge and diplomacy abilities.

“These students are very committed and very driven,” Okular said. “I hope to see some of them as future leaders of [the Student Government Association] at YSU.”

The students were divided into six separate councils; each was given a different issue. There were two security councils, two general assemblies, one crisis council and one human rights council.

The human rights council focused on human trafficking, while one of the general assemblies focused on environmental sustainability.

“We’ve been drafting fake legislation to teach them the inner workings of what goes on in the real United Nations,” Knaub said.

Ricky Clark, a senior at Cardinal Mooney High School, received a delegate award for his work in the general assembly on economic issues and the eurozone crisis.

Clark said the experience reaffirmed his interest in political science, in which he plans to major at the University of Notre Dame. He said he hopes to eventually attend law school.

“It was interesting to be a part of something based on something so much larger,” Clark said. “It feels like you can really make a difference.”

Two Jefferson High School students, Nick Kobernik and Alec McCartey, worked together to receive awards for their work representing the U.S. in the crisis council.

“I feel like we worked well together,” Kobernik said. “He spoke very well, and I did most of the writing.”

Kobernik said he plans to attend Ohio State University for computer science and intends to remain involved in Model UN at the collegiate level.

McCartey said he plans to attend the University of Cincinnati to double major in marketing and international business.

Drew Webster, president of the security council, said he was impressed with the young participants.

“Some of these kids are so brilliant,” Webster said. “It’s insane how much they already know.”

“The students who planned the event did a great job and worked very hard on everything from preparing pamphlets to preparing speeches,” Porter said.