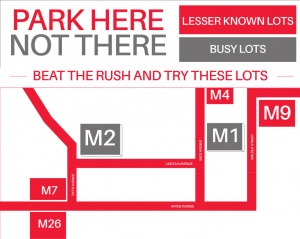 The M2 or M24 lots at Youngstown State University may fill up quickly, but that doesn’t mean there isn’t parking on campus.

Ideally, everyone would be able to park close to their classes, but with about 13,000 students on a mainly commuter campus, that just isn’t possible.

Danny O’Connell, director of Parking Services, said there are about 7,400 parking spaces on campus and 11,000 parking passes registered to students and faculty this semester.

Although those numbers may appear intimidating at first glance, classes are at a variety of times all across campus, so not every student is on campus at the same time.

“We only really need one space for every two permits,” O’Connell said. “There is parking, just not necessarily where you want it.”

Between 10 and 11 a.m. is the busiest time for parking, but even then O’Connell said there is always parking available.

O’Connell compared campus parking to church parking where lots fill up on Christmas and Easter ­— campus parking is designed for regular school days, not big event days like Crash Day.

Sean Meditz, vice president of university affairs for the Student Government Association, said M2 is the most ideal place to park, but it fills up quickly.

“I think there is enough parking on campus,” Meditz said. “However, students don’t like the idea that they’re going to be inconvenienced by having to walk an extra 100 feet.”

There have been several other complaints relating to parking.

One of the major complaints he receives is about the M2 deck, the deck between DeBartolo and Cushwa Halls, in the winter.

“Just the snow piling up and the ice … it was a concern because some of the cars were sliding back,” Meditz said. “So I went over to talk with Parking Services, specifically grounds.”

After speaking with the grounds department, Meditz found the deck had been on their radar, but they were understaffed and trying to keep up with the sidewalks.

“Since last year, I believe they told me they had half of their crew cut,” Meditz said. “I believe because of the budget.”

Meditz said the grounds department deals with a lot on campus, but they may not have enough people to keep up with the snow and ice.

“These guys put in a lot of time,” Meditz said. “I think they only have 12 [people] on their full staff.”

Another complaint often received is about the transportation fee included in tuition costs.

“I don’t think a lot of students understand what their parking fee is going to,” Meditz said.

He said there are a lot of renovations and repairs that need to be made to the parking decks, and they aren’t cheap.

He also said there is definitely a gap between the administration and students in regards to the requirement that students pay a transportation fee, whether they order a parking pass or not.

“I would advise students who want to know more about where their money is going to look at the YSU budget,” Meditz said. “The budget is available online.”

The transportation fee includes use of the shuttle, renovations for the parking decks and campus security services, among other things.